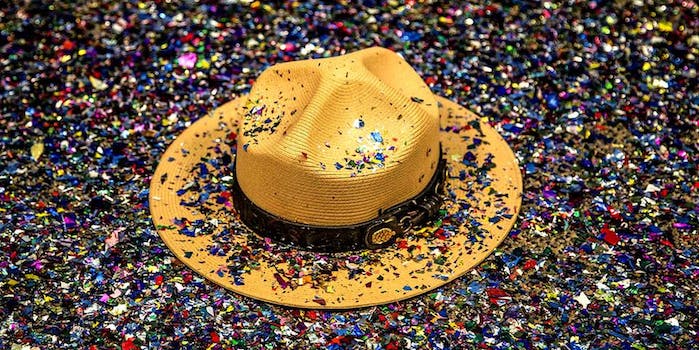 Retweets do not equal endorsements.

The Interior Department is indefinitely suspended from all tweeting privileges across its dozens of official Twitter accounts, all thanks to one National Park Service employee who made two simple retweets.

After the inauguration of President Donald Trump, the National Park Service Twitter account retweeted two tweets that were critical of Trump. One was an article regarding the new White House website missing pages on topics including climate change, and another compared the audience of former President Barack Obama‘s first inauguration to the seemingly-anemic crowd of Trump’s ceremony.

A screengrab of the National Park Service’s Twitter account as of 4pm ET on Friday can be seen below:

Now, according to Gizmodo, the service and all Department of Interior bureaus have been ordered to “immediately cease use of government Twitter accounts until further notice,” according to an internal email from its Washington support office. Though the department’s Twitter fingers are indefinitely suspended, it hasn’t been ordered to delete the accounts—yet.

Here’s the email in full:

We have received direction from the Department through [the Washington Support Office] that directs all [Department of Interior] bureaus to immediately cease use of government Twitter accounts until further notice.

PWR parks that use Twitter as part of their crisis communications plans need to alter their contingency plans to accommodate this requirement. Please ensure all scheduled posts are deleted and automated cross-platform social media connections to your twitter accounts are severed. The expectation is that there will be absolutely no posts to Twitter.

In summary, this Twitter stand down means we will cease use of Twitter immediately. However, there is no need to suspend or delete government accounts until directed.

This does not affect use of other approved social media platforms. We expect further guidance to come next week and we will share accordingly.

Thanks for your help!

According to the Washington Post a government official familiar with the situation said the agency is investigating if the retweets were done accidently or on purpose, or if it was the work of hackers. The Trump-taunting tweets have already been removed.

Though the department is in charge of dozens of accounts at multiple offices and 10 bureaus, a search of National Park Service accounts revealed that at least 70 accounts controlled by the department have yet to reflect the immediate directive, with several accounts having posted tweets anywhere from 14 to 24 hours ago.

It would appear Trump is leaving no stone unturned in his government-wide internet sweep—literally.