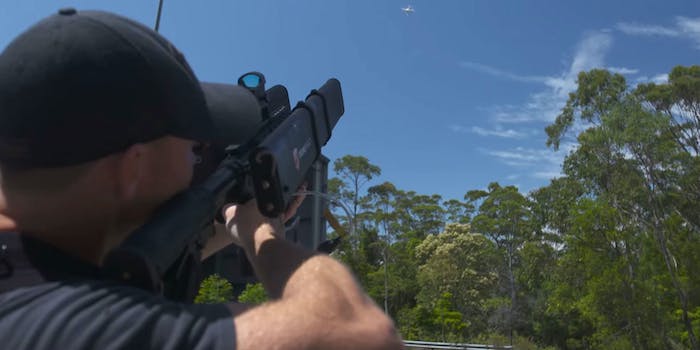 NASCAR isn’t taking any chances letting drones hover above its racing events. The organization reportedly struck a contract with Texas-based anti-drone technology firm DroneShield to use its drone killers at the Texas Motor Speedway in Fort Worth.

First reported by TechCrunch, the deal was established to prevent drones from disrupting drivers as they fly around a loop at high speeds. As you could imagine, there exist an endless number of scenarios that could go wrong. For example, someone trying to catch an epic photo may catch a driver off guard by flying into their line of sight. In another scenario, a drone could run out of battery or lose signal and land on the track, potentially causing serious injury.

“We are proud to be able to assist a high-profile event like this,” DroneShield’s CEO Oleg Vornik told TechCrunch. “We also believe that this is significant for DroneShield in that this is the first known live operational use of all three of our key products—DroneSentinel, DroneSentry and DroneGun—by U.S. law enforcement.”

In its press release, DroneShield claims the Texas State Department of Public Safety, Denton County Sheriff,  Fort Worth Police Department, Texas Forest Service, and the Texas Rangers are already using its entire product suite: the DroneSentinel and DroneSentry for drone detection, and DroneGun jammer to take them down.

DroneShield’s products can only be used by military or authorized personal since the Federal Communications Commission (FCC) prohibits individuals, even local law enforcement, from using jammers on radio signals.

You can see in this promo video above how the jammer, which looks like something out of Halo, disrupts communication between the drone and its pilot by overloading it with high-frequency signals.

It’s becoming increasingly important to protect against drones given their rising popularity, though it isn’t only high-profile events like sports and concerts that have problems with unauthorized drones flying above crowded venues. A recent study conducted by the U.S. Department of Defense and drone monitoring company Dedrone found, on average, two drones flew over restricted military airspace in 2017.