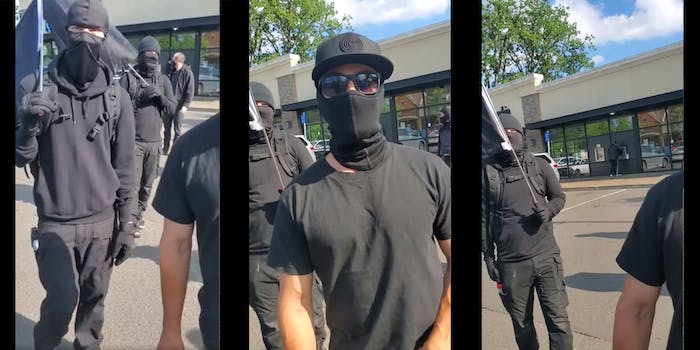 ‘Put your camera away if you know what’s good for you’: Strip mall tough guy gets mad at being filmed

A viral Reddit video shows a “hold-me-back”-type tough guy telling a man to “put your camera away if you know what’s good for you.”

Posted by u/TheAtheistArab87 to Reddit’s popular r/PublicFreakout page, the video shows an unseen man filming what appears to be a mini-mall meet-up in the Mod Pizza parking lot in Oregon City, Oregon. There are a bunch of people dressed in black, waving black flags, usually associated with anarchists.

“So this is going on,” says the unseen videographer, evidently dismayed.

The group appears to be part of a “flag wave” event, where both right and left-wing protestors brought out their respective banners, OPB.org reported. The event took place near Clackamas Community College, which chose to shut down ahead of the rally.

According to Oregon City News, the rally drew both Proud Boys and antifa, although it’s unclear which group the angry man and his friends represent.

In the video, a tough guy dressed in black runs up on the man filming, saying, “Put your camera away, bro.”

The man tells him he’s in a public spot, and tells him not to “push up” on him.

“I’m not, bro; just put your camera away if you know what’s good for you,” says the man.

The videographer once again tells him to back up.

“You can film me as much as you want, but don’t film them.”

“Because I told you to,” responds the man.

“Who the fuck are you?” the videographer asks.

“I’m the one telling you not to fucking film these people,” he responds, sounding only mildly threatening.

Of course, the man has no plans to stop filming and isn’t specifically worried about his implied threats.

He asks the man if he’s scared, and he believes the videographer’s apprehension is solely his doing.

Later a couple of the tough guy’s friends arrive with umbrellas to block the cameraman’s view before he decides to leave.