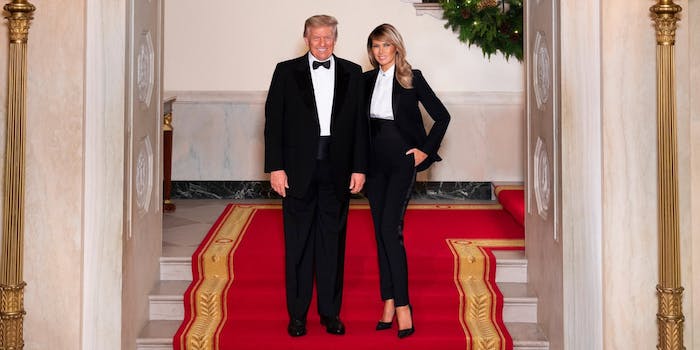 Experts weigh in on the latest conspiracy surrounding the president.

The photograph, which shows the first couple standing on the Grand Staircase inside the White House, became a topic of debate after being published by Melania on Friday.

Among the allegations, as first reported by InStyle, users are claiming that Donald was never actually on the staircase, to begin with, and was instead digitally inserted into the foreground.

Specifically, a picture of Donald standing next to Prince Charles in 2019 during a state visit to the U.K. is being cited as the original source.

“What a lovely photo (shop),” @FrankVerderosa said. “Was Donald lifted out of a photo from this same meeting?”

Users also accused Melania of looking suspicious as well, arguing that the first lady’s outline was too smooth. Other theories made mention of everything, from shadows in the image to alleged issues with lighting.

The claims even appeared to convince Terron Moore, vice president and editorial director of MTV News.

But analysis by experts reveals that there is likely a much simpler explanation for the photo’s appearance.

Television editor and post-production supervisor Dylan Reeve told the Daily Dot that photographs such as ones put out by the White House can often appear strange due to being “heavily touched up.”

As far as the claim that an older image of Donald was inserted into the new one, Logan Williams, a data analyst with Bellingcat, argued that the two pictures of the president are not the same.

Williams noted that Donald’s shirt cuffs were visible in the older photo from the U.K. but not in the Christmas image. Reeve also added that the president’s cummerbund and bow tie were noticeably different as well.

“Both Donald and Melania have very well established poses,” Reeve said. “Their faces and poses are so well-rehearsed that they frequently look almost identical from image to image, even months or years apart.”

Reeve further argued that the shadows behind the first couple, which he described quite minimal and flat, can be attributed to a “non-traditional lighting style” consistent throughout the photo.

“The floor reflection is consistent too,” Reeve said. “Something I think people would likely mess up if they were faking it.”

While it remains unclear what edits were made to the photograph, no evidence suggests Donald or Melania weren’t present. The Daily Dot reached out to the photographer behind the photo, Andrea Hanks, but did not receive a response by press time.

The incident is similar to claims in October, in which Twitter users suggested the president filmed himself standing in front of a green screen after testing positive for COVID-19.

In that case as well, experts debunked the conspiracy after analyzing the footage in question.