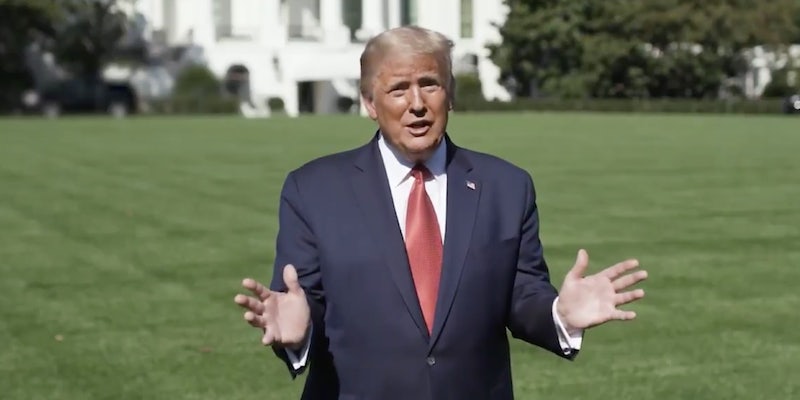 It seems like way more effort than just wheeling him outside for three minutes.

President Donald Trump was accused on Thursday of filming in front of a green screen after posting a video to his Twitter account.

The footage, in which Trump discusses the experimental treatment he’s received after being diagnosed with the coronavirus last week, appears to have been filmed on the White House lawn.

The process works when an individual is filmed in front of a large piece of green fabric, which is digitally replaced with video footage. The technique is often used by weatherman, for example, when delivering the forecast.

Twitter users are convinced, however, that Trump never stepped foot outside the White House and instead relied on the technology to make it appear as if he had.

However, experts disagree with the online assessment.

Suggestions were made that the imagery behind Trump was actually a three-second long video clip on repeat and that the president had filmed the video inside due to his ailing health.

The allegation made the rounds among prominent Twitter users who argued that the clip was undoubtedly fabricated.

“At first I thought people were being conspiratorial, but this is definitely shot in front of a green screen,” @RexHuppke said. “Watch the upper right and left quadrants and how the tree movement is on a loop. Why are they so bad at everything?”

But others pointed to specific sections of the video that appeared to prove it was genuine, including parts in which the president’s hair seemed to move with the wind. The lighting in the video looks to match the environment as well.

The Daily Dot spoke with an expert at a leading green screen company, who asked to remain anonymous due to the political nature of the video, who said he could not tell definitively whether a green screen was used.

The Daily Dot also reached out to the White House for comment on the claims but did not receive a reply.

Other audiovisual experts have said it’s unlikely, pointing to the shadows on the White House and Trump’s lighting.