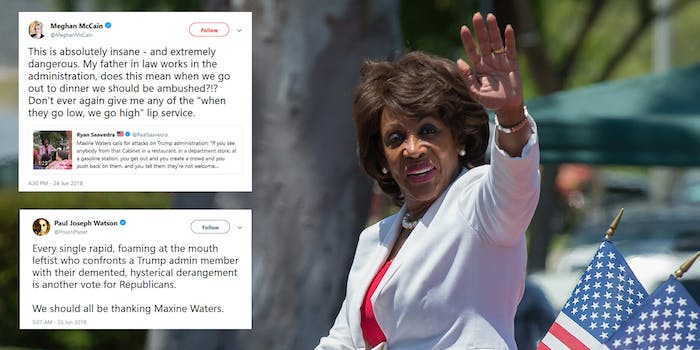 Some Trump supporters are calling for Waters to be arrested.

The call to her supporters comes after White House Press Secretary Sarah Huckabee Sanders was asked to leave the Red Hen restaurant in Virginia on Friday and protesters shouted “shame” at Homeland Security Secretary Kirstjen Nielson while she ate in a Mexican restaurant early last week.

“Let’s make sure we show up wherever we have to show up,” she said over the weekend. “If you see anybody from that cabinet in a restaurant, in a department store, at a gasoline station, you get out and you create a crowd, and you push back on them, and you tell them they’re not welcome anymore, anywhere.”

The California representative, who has been critical of Trump in the past, also called for the president to be impeached, condemned Attorney General Jeff Sessions, and criticized his desire to build a wall along the southern border of the United States. Waters also hammered the administration for its policy of separating undocumented children from their families.

“History is not going to be kind to this administration, but we want history to record that we stood up, that we pushed back, that we fought, that we did not consider ourselves victims of this president,” she told a crowd. “History will record that while he tried to step on all of us, we kicked him in his rear and we stepped on him.”

Waters’ remarks were not taken well by supporters of Trump, who had already spent the weekend criticizing the owner of the Red Hen restaurant who asked Sanders to leave.

In a tweet about Waters’ request to continue disrupting members of the Trump administration, Rep. Steve Scalise said “civility and respect always prevails over harassment and disrespect.”

On Fox & Friends, a morning talk show that Trump is known to favor, the hosts said the California representative encouraged her supporters to “harass” members of the administration.

“It’s hateful and it’s rude, and it can lead to something very, very dangerous,” host Ainsley Earhardt said. “It could lead to violence because you have people–their blood is just boiling. If there is a confrontation, someone could get hurt in all of this if you’re asking for people to be harassed.”

However, others were more emotive in their response to Waters, with some people online calling for Waters to be arrested.

Maxine (James Brown Impersonator) Waters is mentally unstable and should have to undergo psychiatric evaluation. She should be called out for her GHETTO behavior by Speaker RYAN. HE'S AFRAID OF HER though. I don't blame him either. That goof is DANGEROUS. https://t.co/ZXakBJLQLm

Every single rapid, foaming at the mouth leftist who confronts a Trump admin member with their demented, hysterical derangement is another vote for Republicans.

We should all be thanking Maxine Waters.

She is a fraud, and has a low IQ

This is absolutely insane – and extremely dangerous. My father in law works in the administration, does this mean when we go out to dinner we should be ambushed?!? Don’t ever again give me any of the “when they go low, we go high” lip service. https://t.co/UF1feYT0Pm

Trump was accused of inciting violence during the 2016 election for using similar rhetoric as Waters.

Congresswoman Maxine Waters, an extraordinarily low IQ person, has become, together with Nancy Pelosi, the Face of the Democrat Party. She has just called for harm to supporters, of which there are many, of the Make America Great Again movement. Be careful what you wish for Max!