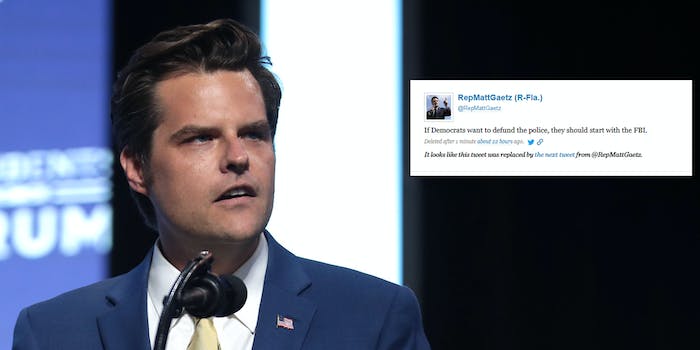 The FBI is investigating whether Gaetz participated in the trafficking of a minor for sex.

Rep. Matt Gaetz (R-Fla.) wrote a tweet on Wednesday where he said that the U.S. should “defund” the FBI before deleting the tweet a minute later.

The FBI is investigating whether Gaetz participated in the trafficking of a minor for sex, specifically whether he trafficked a 17-year-old girl with whom he was having a sexual relationship two years ago. Joel Greenberg, a friend of Gaetz who is at the center of the investigation, struck a plea deal with authorities in May.

But on Wednesday morning, Gaetz tweeted about the bureau, writing: “If Democrats want to defund the police, they should start with the FBI.”

He deleted the tweet about a minute after posting it, according to ProPublica’s Politwoops, a service that tracks politician’s tweets.

In a statement to Vice News, a spokesperson for the congressman said Gaetz “felt it appropriate to remove a jocular tweet taken from a speech some time ago.” It is unclear which speech the spokesperson was referring to.

The backdrop of the FBI investigating him made Gaetz’s call to “defund” the FBI quickly be noticed by people online.

“@RepMattGaetz why did you delete this tweet? Are you trying to get rid of the @FBI because they’re investigating you?,” one Twitter user wrote.

“@mattgaetz tweeted to defund the @FBI. Ironic,” another person added.

This isn’t the first time Gaetz’s tweets have backfired amid the FBI’s probe.

In May, Gaetz tried to come after Rep. Adam Kinzinger (R-Ill.) ahead of a House of Representatives vote to oust Rep. Liz Cheney (R-Wy.) only to be completely shot down by the fellow Republican.

Gaetz unearthed a tweet where Kinzinger spoke about a failed attempt to remove Cheney from her post. In response, Gaetz retweeted the old tweet and wrote “tweets that don’t age well” with a finger-pointing emoji.

In response, Kinzinger said: “I’d stay away from ‘aging well’ tweets.” He clearly was referencing the FBI probe.