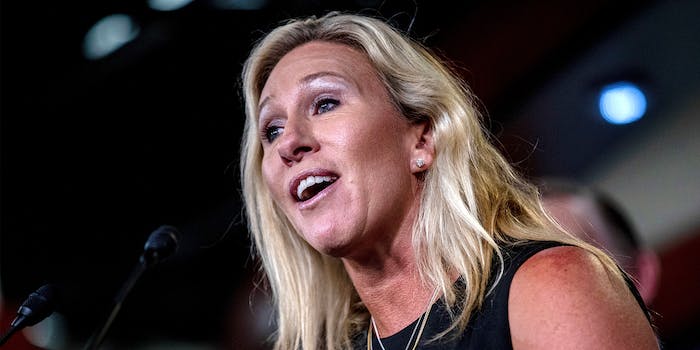 Greene said that COVID-19 was not dangerous for those who are not obese or over 65.

Rep. Marjorie Taylor Greene (R-Ga.), has been temporarily suspended from Twitter for violating the platform’s COVID-19 misinformation policy after she falsely claimed the disease was “not dangerous” for some people.

According to a Washington Post report, the 12-hour, read-only suspension came Monday evening after Greene tweeted that COVID-19 was “not dangerous for non-obese people and those under 65.”

That comes despite a new rise in cases, hospitalizations, and deaths in the U.S. across a broad age spectrum, attributed in large part to the delta variant and a significant portion of the U.S. population remaining unvaccinated.

The tweet in question remains on her @mtgreenee account, but Twitter has flagged it with a message noting that it is “misleading,” with a link to curated tweets on why health experts recommend vaccines.”

Her tweet, in response to concerns over compulsory vaccines for military members, reads, “The controversial #COVID19 vaccines should not be forced on our military for a virus that is not dangerous for non-obese people and those under 65.”

It adds, “With 6,000 vax related deaths and many concerning side effects reported, the vax should be a choice not a mandate for everyone.”

Greene appeared to be referring to CDC data showing that out of more than 334 million COVID-19 vaccine doses administered in the United States from Dec. 14, 2020, through July 12, 2021, the Vaccine Adverse Event Reporting System (VAERS) reporting system received 6,079 reports of death among people who received a COVID-19 vaccine.

But the site noted that represents just 0.0018% of vaccine dose cases, and that the U.S. Food and Drug Administration “requires healthcare providers to report any death after COVID-19 vaccination to VAERS, even if it’s unclear whether the vaccine was the cause. Reports of adverse events to VAERS following vaccination, including deaths, do not necessarily mean that a vaccine caused a health problem.”

Twitter’s page on its range of enforcement options indicates: “We take action at the account level if we determine that a person has violated the Twitter Rules in a particularly egregious way, or has repeatedly violated them even after receiving notifications from us.”

The 12-hour read-only suspension is at the lightest end of Twitter’s punishment spectrum; Twitter enforces read-only penalties from up to seven days, and then reserves permanent suspension—like former President Donald Trump received—as its “most severe enforcement action.”

In a statement to the Daily Dot, Twitter said that “we took enforcement action on … @mtgreenee for violations of the Twitter Rules, specifically the COVID-19 misleading information policy.”