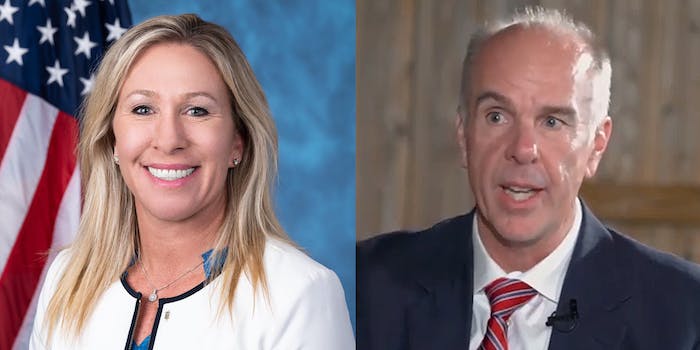 Tuesday’s House primaries were a good night for people who have endorsed the QAnon conspiracy, as two of them won races and will go on to face Democrats in the general election in November.

Rep. Marjorie Taylor Greene (R-Ga.) is the face of the conspiracy in the U.S. Congress, one of the first believers to ever be elected to public office. She easily coasted to a victory in her district in North Georgia.

As Greene’s notoriety grew, she attracted national attention and scrutiny. Although she has attempted to distance herself from the conspiracy that alleges a cabal of satanic Democratic pedophiles running the nation is being fought in secret by former President Donald Trump, she also once called the person who runs QAnon a “patriot.”

Her constant antics in Congress, such as introducing articles to immediately impeach President Joe Biden and needing to apologize for her 9/11 denialism, drew her five challengers in her heavily Republican district. However, Greene bested all of them, pulling in almost 70% of the vote. She will now face Marcus Flowers, a former veteran who has called out Greene’s support of QAnon in his ads.

In Texas, Teague’s Republican primary went to a run-off, where he defeated Stroud by nearly 4,000 votes. Teague once retweeted an odd tenet of QAnon, that JFK Jr. is still alive, and retweeted other images that showed support for the conspiracy. Texas now has two candidates who espoused QAnon beliefs, with Mayra Flores on the ballot in Texas’ 34th district.

Teague will face incumbent Lizzie Pannill Fletcher, who has served in the House since 2018.