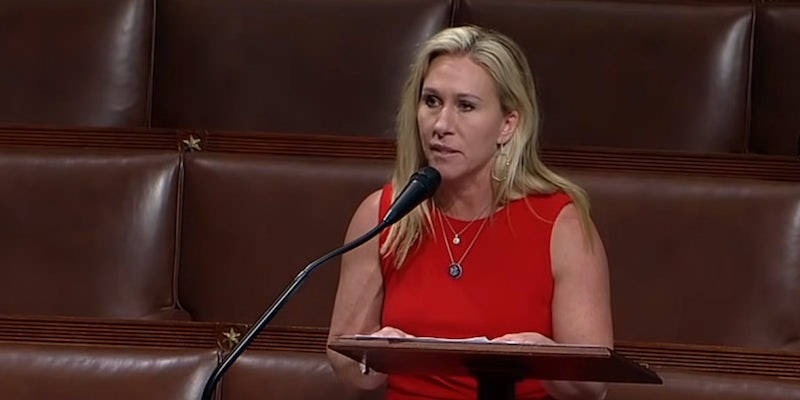 Rep. Marjorie Taylor Greene (R-Ga.) criticized the Biden administration for not allowing doctors to prescribe ivermectin to treat COVID-19 because it “won the Nobel Peace Prize.”

Greene, who has a history of spreading COVID misinformation, made the remarks during a recent interview.

Despite those warnings, there have been reports of people taking ivermectin, particularly people who don’t want to get the COVID vaccine. Earlier this year, Mississippi’s Department of Health said there was a spike in calls to poison control centers because people were using ivermectin to treat COVID, specifically formulations that could be purchased at livestock supply centers.

Greene, during a recent interview, called it “irresponsible” for the administration and health agencies “to be advising people to not prescribe it.” But ivermectin hasn’t been proven to treat COVID and it also did not with the Nobel Peace Prize.

Scientists were awarded the Nobel Prize in physiology or medicine in 2015 for their discovery that the drug can treat some parasitic diseases, according to PolitiFact. The coronavirus is caused by a virus.

The Nobel Foundation gives out a series of prizes every year in a number of categories including: physics, chemistry, medicine, literature, economics, and perhaps most well known, peace.

It appears Greene missed the difference between the peace prize and the prize in medicine. Numerous people online pointed out Greene’s error.

“Damn, I wanted to hear Ivermectin’s acceptance speech. I guess we can add ‘Nobel Peace Prize’ to the (very) long list of things about which Marjorie Taylor Greene proudly, defiantly and obviously knows jack shit,” one Twitter user wrote.

“MARGARINE DOESN’T UNDERSTAND THE DIFFERENCE BETWEEN A NOBEL PEACE PRIZE AND A NOBEL PRIZE IN MEDICINE, I GUESS,” another Twitter user chimed in with.

“Someone should explain the difference between the Nobel Peace Prize and the Nobel Prize in Physiology or Medicine,” another user said.