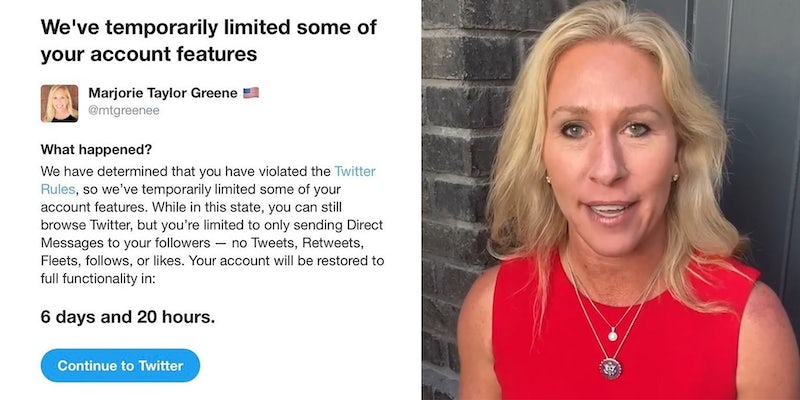 Greene's account will be in 'read-only mode' for a week.

Rep. Marjorie Taylor Greene (D-Ga.) has been suspended from Twitter for a week after violating the company’s COVID-19 policies.

On Monday night, Greene—who has long pushed COVID misinformation and other conspiracy theories—tweeted that the Food and Drug Administration (FDA) “should not approve the covid vaccines” and that they were “failing” and didn’t reduce the spread of the virus.

A Twitter spokesperson told the Daily Dot that Greene’s account will be in “read-only mode” for a week due to “repeated violations” of the company’s rules.

But the week-long suspension announced on Tuesday is far from the only time Greene has run into policy violations on the platform.

In July, Greene was handed a 12-hour suspension for violating Twitter’s COVID-19 misinformation policy for falsely claiming that the disease was “not dangerous” for some people. That tweet was also flagged by Twitter as being misleading.