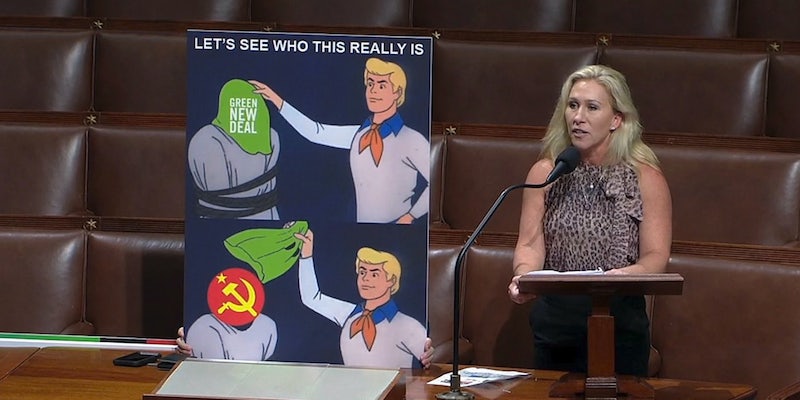 ‘This is beyond embarrassing’: Marjorie Taylor Greene mocked for using Scooby-Doo meme during speech

It referenced the Green New Deal.

Greene, the conspiratorial lawmaker who is no stranger to being the center of criticism online, used a large cardboard prop on the House floor to try and make her points.

The meme was two images. The first features the character Fred from Scooby-Doo pulling a rag off someone’s head that has “Green New Deal” written on it. That image is captioned “Let’s see who this really is.”

The second image is of Fred pulling the rag off the person’s head, with the communist hammer and sickle image put over his face.

“This a simple meme that would find on the internet,” Greene said on the House floor, gesturing at a large printout of the meme. “But this meme is very real. The Green New Deal, surprise, serves China and China only.”

The congresswoman was apparently proud of her meme stunt, because she shared a photo of it on her government Twitter account.

While she may have thought it was clever, Greene’s use of the meme during a speech on the House floor amused many people online, who mocked it and made jokes about it.

“Marjorie Taylor Greene really showed up with no arguments but found the time to go to office supply and print out shitty memes,” one person wrote.

“Marjorie Taylor Greene is mad she not being taken seriously as she tries to govern via Facebook meme,” another person added.

“Marjorie Taylor Greene is just a human embodiment of a bad right-wing meme page,” someone else added.

Others also joined in:

Even Greene’s quote—that “This a simple meme that would find on the internet”—became somewhat of a meme.

Fellow Republican Rep. Adam Kinzinger (R-Ill.) summed up his thoughts about the meme stunt succinctly: “Congress is no longer serious with people like this.”