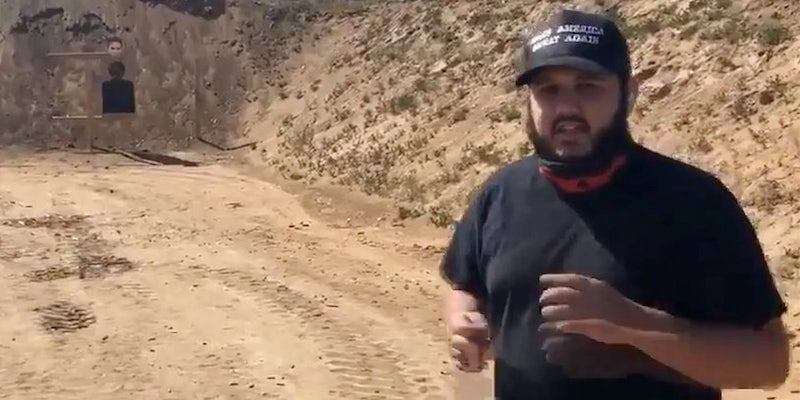 A supporter of President Donald Trump was suspended from Twitter after he posted a video of him shooting a photo of David Hogg, a survivor of the school shooting in Parkland, Florida.

In the video, the Twitter user @MagaFrank2 shoots a photo of the shooting survivor while wearing a black “Make America Great Again” hat.

Hogg is one of several survivors who have pushed for gun reform after 17 people died at their school after a shooter opened fire on Valentine’s Day. Hogg, in particular, has been the subject of conspiracy theories from far-right people online.

The person behind the account, Frank Espinsoza, spoke with Newsweek about the video and said he was a “performance artist.”

“I wanted to see the trajectory of where this [Internet censorship] was going,” he told the news outlet, adding that it was “possible” that the video could inspire violence against Hogg.

After posting the video, Espinoza was met with a torrent of backlash from people who reported him on several social media platforms, including YouTube. His Patreon page appears to still be active.

“Putting the face of a school shooting survivor on a target. WOW, you’re a piece of shit,” one Twitter user, @FrankRCastillo, wrote.

“Hey @FBI and @TwitterSupport Can someone check @MagaFrank2 seems he is threatening a child,” another user, @Babearella wrote.

It was Hogg’s 18th birthday earlier this week.