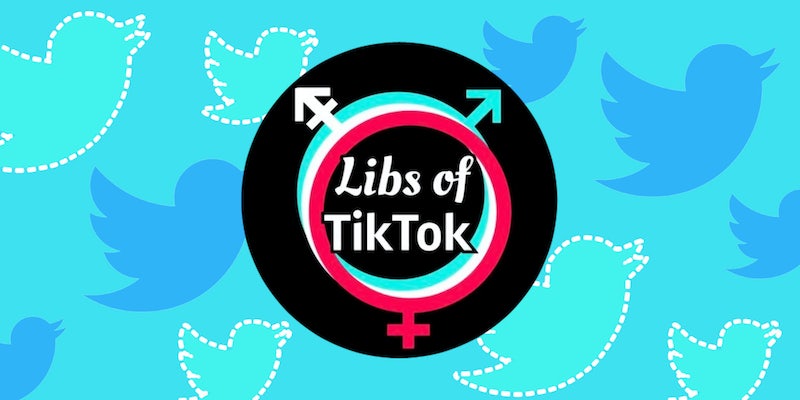 The audio set off a weekend-long firestorm.

On Thursday, Chaya Raichik, the person behind the right-wing account Libs of TikTok, tweeted audio of a conversation she had with employees at Children’s National Hospital that set off a weekend-long firestorm. It ended in her account getting temporarily suspended from Twitter.

Libs of TikTok’s last post appears to be on Friday.

On Thursday, Aug. 25, Libs of TikTok shared audio that caused a right-wing explosion, in which she spoke to at least two employees at Children’s National Hospital and asked them if they would perform hysterectomies on children under the age of 18 to aid in transitioning.

The call came as conservatives have led a charge against children’s hospitals for providing care to trans patients, as part of a moral panic against transgender people, one which Libs of TikTok both spearheaded and egged on.

In the audio, it’s unclear who Raichik speaks to, but she goads them into saying they would conduct hysterectomies on patients under the age of 18.

According to the Washington Post, Children’s National Hospital didn’t dispute the accuracy of the audio but said that the employees provided inaccurate information. Conservatives have pointed back to a line on Children’s website, which said the hospital provided gender-affirming care to patients from ages “0-21.”

But the denials from Children’s National Hospital did not satiate the right-wing crowd stirred up by the audio. It led to a flood of threats against the hospital, which has happened to a number of children’s hospitals that Libs of TikTok and other prominent conservatives posted about this month.

In the wake of the reports about threats being made to the hospital, Libs of TikTok was locked out of her account.

According to Fox News, Libs of TikTok is not allowed to post for a week.

In its message to Libs of TikTok, Twitter noted that “You may not promote violence against, threaten, or harass other people on the basis of race, ethnicity, national origin, sexual orientation, gender, gender identity, religious affiliation, age, disability, or serious disease.”

However, it did not cite specific posts that Libs of TikTok made that brought about the action on her account.