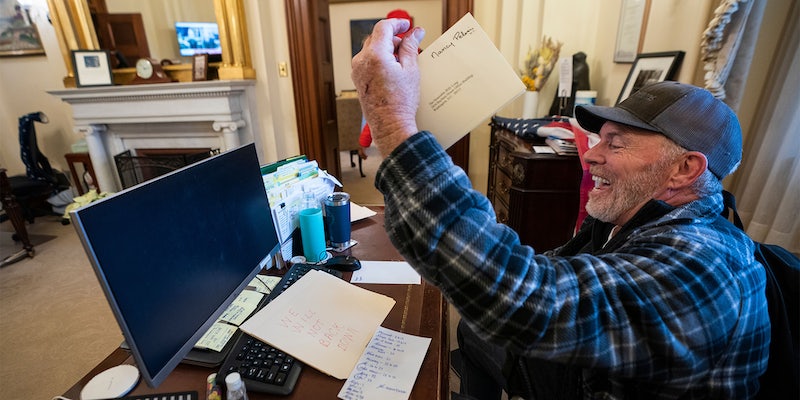 'One of today's many felons who attempted a coup apparently has no problem accepting money from the government he tried to overthrow.'

One of the rioters who stormed the Capitol building on Wednesday received a Paycheck Protection Program loan.

The rioter, who broke into House Speaker Nancy Pelosi’s (D-Calif.) office, stole a letter from her desk and flaunted it in the hours following the chaos. He was identified by Matthew Rosenberg of the New York Times as Richard “Bigo” Barnett, a 60-year-old Gravette, Arkansas resident. He went viral Wednesday afternoon after Rosenberg shared statements, along with a video clip, of Barnett admitting to stealing the letter.

“I didn’t steal it,” Barnett told Rosenberg on camera. “I put a quarter on her desk, even though she ain’t fucking worth it, and I left her a note on her desk that says ‘Nancy, Bigo was here you bitch.'”

Rioters shattered windows and forced their way through barricades to gain access to the Capitol Wednesday. Lawmakers were forced to shelter in place or evacuate as armed rioters swept the building, gaining access to the offices of several high-ranking officials as well as the floor of Congress. Barnett was pictured sitting with his feet on Pelosi’s desk. Her office was vandalized by a number of President Donald Trump supporters, who flipped desks, tore pictures off the walls, and rifled through the speaker’s property.

In the hours after the chaos subsided—and Barnett’s name began circulating—internet sleuths discovered that he was among those that received a PPP loan to offset the impact of the COVID-19 pandemic earlier this year. In April, Barnett, an independent contractor according to the federal database of PPP data, received a loan of $9,300. The Daily Dot was able to independently verify this information.

As word got out that Barnett received money from the government to help keep his business afloat, a rage overtook many observers. They began sharing screenshots of Barnett’s loan data from the FederalPay website, urging the government not to “forgive” the looter’s more than $9,000 loan.

Other’s pointed out that the PPP loan could be considered socialism in many contexts. Based on how Barnett spoke during the riots, he would not typically back this kind of government support. Unless it benefits him, of course.

“The guy [on] the right is Richard Barnett of Gravette, Arkansas and he’s so oppressed that he got $9,300 in PPP money from the government he just looted,” Twitter user @ifstonefan wrote.

“One of today’s many felons who attempted a coup apparently has no problem accepting money from the government he tried to overthrow,” another user noted.

On the bright side, as many people pointed out, much of law enforcement’s work has been done for them. Barnett’s business address is clearly stated on the FederalPay website, so he should be in custody in no time.