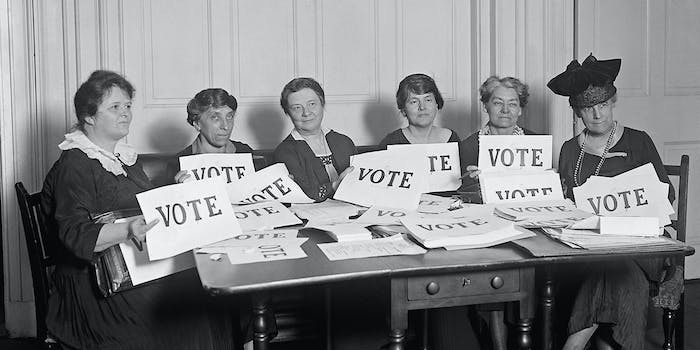 The quest for D.C. statehood has split Democrats and Republicans along partisan lines, with the former for it and the latter against.

Democrats argue that it’s about expanding voting access and racial equity. A majority of Washington D.C.’s residents are people of color.

Republicans oppose statehood for Washington, D.C. because racial minorities are much less likely to vote Republican. “Instead of jumping to full-fledged statehood—which would conveniently add two brand-new Democrats to the U.S. Senate—we should address the underlying issue, which is representation,” Rep. Adam Kinzinger (R-Ill.) said before the House vote, the New York Times reports.

Amid all of this, one Republican state lawmaker decided to wade into the ideological battle on Twitter. His tweet is getting seriously ratioed.

Loychik was quickly drowned out by people correcting him.

“Those Founders also declared that ‘all men are created equal’ in a nation built upon genocide and enslavement—then 11 years later, created a Constitution in which enslaved black people weren’t counted as fully human,” retorted Jamil Smith of Vox. “I suggest you find a different standard.”

Smith added that Ohio didn’t even exist at the nation’s founding. Thus, by Loychik’s line of thinking, since Ohio wasn’t one of the thirteen colonies, it shouldn’t exist today.

“Yet other states were added. Do you intend to remove their statehood’s?” actress Patricia Arquette similarly pointed out.

Many people noted that the founders, whom Republicans often lionize, also enslaved Black people and generally didn’t believe in equality for anyone who wasn’t a white, male, landowner.

Some noted that the founders were also vehemently opposed to taxation without representation.

Many argue that, because it isn’t a state and thus doesn’t have full representation in the federal government, Washington, D.C. residents are taxed without representation.

The fate of Washington, D.C. statehood now lies in the Senate. Because of the filibuster, it has slim chances of success.