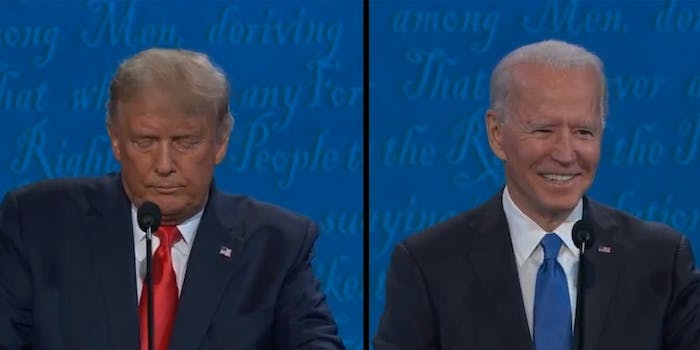 The internet isn't holding its breath.

Thirty minutes into Thursday night’s final presidential debate, Democratic presidential nominee Joe Biden got the moment he was waiting for when the subject of President Donald Trump’s taxes came up.

After years of Trump promising and failing to release his taxes, last month, the New York Times revealed that Trump had paid no taxes for many years, and just $750 per year in the first years of his presidency.

When Trump tried to insinuate that Biden was under China’s influence, a frequent talking point of his campaign, the former vice president turned it around.

“I have not taken a penny from any foreign source. But Trump has a secret bank account in China … You have not released your tax returns. What are you hiding?”

Trump responded by yet again vowing that he will release his taxes … eventually. He also claimed that he’s prepaid tens of millions of dollars of taxes.

Biden’s smile said it all.

Several noted that Biden has released 22 years of his tax returns.

The internet was right there with Biden.

“This man been ‘under audit’ since Iron Man 3,” quipped Gene Demby.

While many had serious criticisms, others brought jokes.

Thursday night’s debate is the final meeting between the candidates prior to the Nov. 3 election.