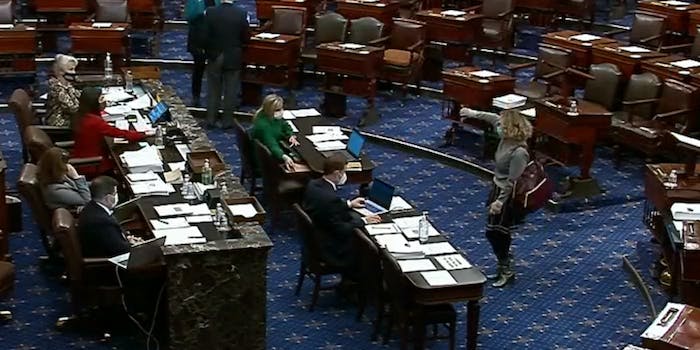 ‘Tough to express how angry this makes me’: Video shows Democrat cheerfully voting down $15 minimum wage

A lot of people are criticizing video of Kyrsten Sinema voting.

Sen. Kyrsten Sinema (D-Ariz.) was one of eight Democrats who voted on Friday against increasing the minimum wage to $15-an-hour as part of the coronavirus relief package.

But a video showing her walking in front of the Senate clerk and giving a thumbs down while shimmying her hips during her vote has gone viral on Twitter—sparking numerous people to criticize the Arizona senator for being “a little too happy” to vote the way she did.

“Senator Sinema a little too happy for poverty wages to remain,” @Roots_Action tweeted on Friday with a video of the vote.

A lot of people took issue with Sinema’s apparent demeanor during the vote.

“She really threw her hip into that ‘fuck you’ to the working class,” one person on Twitter wrote.

“this is sociopathic behavior,” tweeted another user.

“Amazing to see a live enactment of an approval rating,” another tweeted.

But those were just a handful of the responses, which began accumulating quickly on Friday afternoon.

Some people thought Sinema may have been trying to do something similar to the late Sen. John McCain (R-Ariz.), who famously also animatedly pointed his thumb down to vote against repealing the Affordable Care Act in 2017.

In a statement posted on Twitter, Sinema said the Senate should have “an open debate and amendment process on raising the minimum wage” apart from the coronavirus relief bill.

Either way, if Sinema faces a primary challenge, you can probably count on the video being part of a campaign ad.