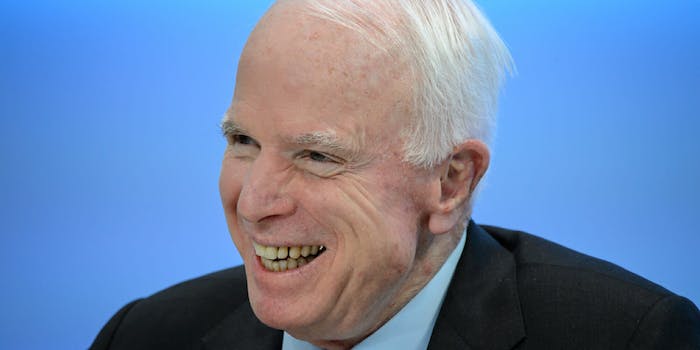 Seven years of anti-Obamacare dreams and rhetoric ended with a simple thumbs-down.

The Arizona Republican moved to reclaim his much-ballyhooed, much-derided “maverick” status at 1:30am in Washingon, D.C., on Friday morning by voting against the GOP’s last-ditch effort to repeal key portions of the Affordable Care Act (ACA), casting the 51st vote that served as its final blow.

McCain’s vote reportedly came as a surprise to most lawmakers—and likely many Americans, some of whom spent the previous three days condemning McCain as a fraud. On Tuesday, he voted to begin debate on Republican-led healthcare legislation, a crucial first step that pushed Obamacare close to the cliff’s edge.

Early Thursday evening, McCain, along with Sens. Lindsey Graham (R-S.C.) and Ron Johnson (R-Wisc.) held a press conference to announce that they would vote against the so-called “skinny” repeal of Obamacare because they thought the House of Representatives might pass the bill outright rather than tweak it in conference with the Senate. Such an outcome, Graham said, would be a “disaster.”

Ultimately, the House promised to go to conference ahead of the Senate’s repeal vote, and Graham and Johnson flipped to “yes.” McCain, however, held off. Asked how he would vote, he replied, “Watch the show.”

Watch as Sen. John McCain casts "no" in vote on #SkinnyRepeal of Obamacare pic.twitter.com/tJkjc9RWVD

For more than an hour, McCain’s fellow Republicans attempted to sway him back to their side. Vice President Mike Pence, Senate Majority Leader Mitch McConnell, Texas Sen. John Cornyn—none were persuasive. The Maverick was a no.

Although McCain is getting credit for the death of the Obamacare repeal because his vote was a surprise and because he cast the 51st, deciding vote, credit (or blame, depending on your outlook) also goes to fellow Republican Sens. Lisa Murkowski (Alaska) and Susan Collins (Maine), who consistently voted against the Republican efforts. Of course, Democrats and independents, too, prevented its passage, with all non-GOP lawmakers blocking the measure.

Alas, it is McCain, the veteran who suffered torture in Vietnam now battling recently diagnosed brain cancer, who, justly or not, has captured the mantle of healthcare hero for those opposed to his party’s policies—and villain for everyone else.