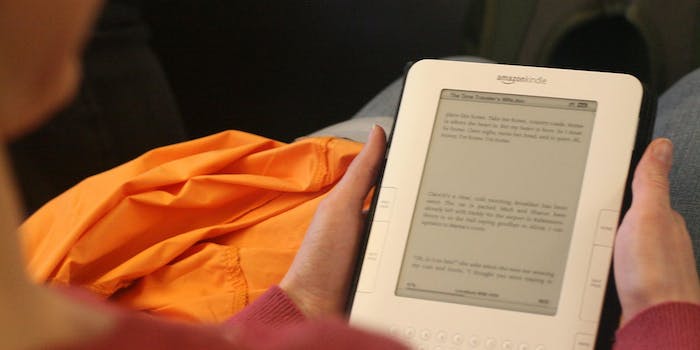 They may be smaller and more convenient, but a new study shows that e-readers can take away from the overall reading experience.

A study performed in Europe found that those who read material on a Kindle absorbed less of it than those who read the same story on paper. The findings, reported last month at a conference in Italy, showed that Kindle readers performed significantly worse on a comprehension test than their paper-reading counterparts.

A group of 50 individuals were given a short story by Elizabeth George to read. Half the group read the 28-page story on a Kindle. The other half read it on paper. The group then took a comprehension test. Researchers found that readers for both platforms experienced similar levels of immersion and emotional response, but scores regarding reading comprehension differed significantly.

“The Kindle readers performed significantly worse on the plot reconstruction measure, i.e., when they were asked to place 14 events in the correct order,” Anne Mangen, a lead researcher on the study, told the Guardian.

Mangen, who works at the Reading Centre at the University of Stavanger in Norway, explained that she and the rest of the research team hypothesized that there would be differences in the way readers reacted to the content. The discrepancies in comprehension, they concluded, had to do with the tactile difference between handling a tablet and a book.

“When you read on a paper, you can sense with your fingers a pile of pages on the left growing and shrinking on the right,” Mangen said. “[The differences for Kindle readers] might have something to do with the fact that the fixity of a text on paper, and this very gradual unfolding of paper as you progress through a story, is some kind of sensory offload, supporting the visual sense of progress when you’re reading.”

As a new school year starts up, it’s clear to see that digital technologies have slowly been replacing textbooks in the classroom, offering new ways for teachers to present curriculum. Last year, CBS News reported that 2,000 schools partnered with Google to use their Chromebooks while Google officials said that 20 million students and teachers had already begun using the devices. A poll of 2,300 American students taken last year revealed that 70 percent of middle school students and 75 percent of high school students use laptops for educational purposes, with the percentage of students using tablets and e-books lagging.

Whether these devices truly enhance learning has yet to be studied in depth, though there has been speculation as to whether students really are benefiting.

The results found by Mangen and her fellow researchers only had to do with Kindle, though her previous study with iPad users found a discrepancy in emotional immersion into the material. In presenting the new study, Mangen also cited a 2012 study that had similar results when testing those who’d read material on a computer versus those who read on paper.