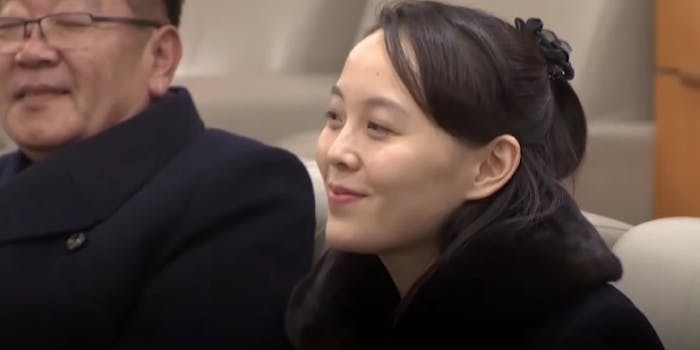 'I want Kim Yo Jong to step on me PLEASE,' one said of Kim Jong Un's likely successor.

There is a lot of uncertainty surrounding the health of North Korean leader Kim Jong Un and who would take his place should he die. One of the top names floating around is his sister, Kim Yo Jong.

It has been reported that Kim is either in a vegetative state, dead, or very much alive and well after a “botched” heart surgery.

TMZ, which is known for being the first to accurately report on deaths, reported on Saturday that Kim had died. But on Sunday, Kim’s train was reportedly spotted via satellite images at an elite coastal resort, leading U.S. and South Korean officials to believe he is still alive. Nevertheless, attention has swiftly shifted to 31-year-old (presumed age) Yo Jong as his likely successor.

“Among the North’s power elite, Kim Yo Jong has the highest chance to inherit power, and I think that possibility is more than 90%,” an analyst told the Associated Press.

Should she take over as supreme leader, Yo Jong, who has been described as her brother’s closest confidant, would be the first female to rule since the Kim dynasty took over North Korea in 1948.

In her very first public statement, she mocked South Korea for opposing a live-fire military demonstration, calling it a “frightening dog barking,” per the New York Post. She is also blacklisted by the U.S. Treasury Department for “severe human rights abuses.”

All this hasn’t stopped some online from stanning the presumptive future dictator. One called her a “girl boss,” while another pondered if she has “open DMs.”

“I want Kim Yo Jong to step on me PLEASE,” Twitter user @Weeeeeebo wrote.

Others are making Yo Jong fancams, a video compilation of fan-shot content popular among K-pop stans.

The Yo Jong fancam phenomenon led her name to trend on Saturday night, into Sunday. But when scrolling through the trend, the majority of tweets are criticizing those who have decided to stan her.