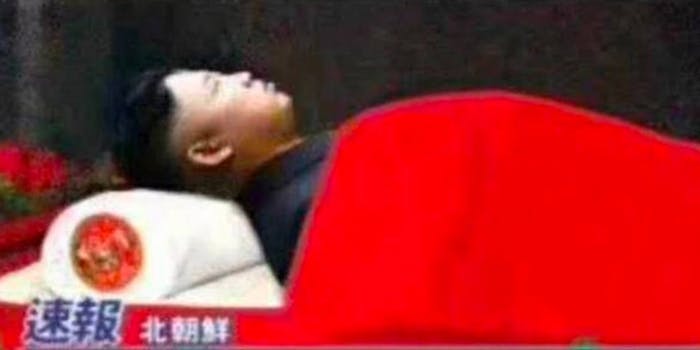 The image comes as questions over the North Korean leader's health intensify.

The image, which surfaced amid rumors that the dictator’s health has taken a turn for the worst, has been attributed to both Chinese and Japanese media by those sharing it online.

But the question remains. Is the image actually real?

As reported by The Sun, the picture appears to have been edited. Kim Jong Un’s face was merely placed over the body of his father, Kim Jong Il.

During his 2011 funeral, the late North Korean ruler was seen with the exact same pillow and red blanket.

While the picture may be fake, questions regarding Un’s status are not entirely unfounded.

The dictator has not been publicly seen since April 11 and did not appear at the commemoration on April 15 for the 108th birthday of his grandfather, North Korea founder Kim Il Sung.

Although some have claimed that Kim either died or is in a vegetative state following a botched heart surgery, others, including a South Korean official, have stated that the leader is “alive and well.”

President Donald Trump alluded to having information on Kim’s condition during a press conference Monday, but declined to provide details when pressed on the matter.

“I can’t tell you, exactly — yes, I do have a very good idea, but I can’t talk about it now,” the president said. “I just wish him well.”

Whatever his state, it’s likely we will all learn of Kim’s status at some point in the near future. For now, it’s best to ignore unsubstantiated claims and pictures that pop up on social media.