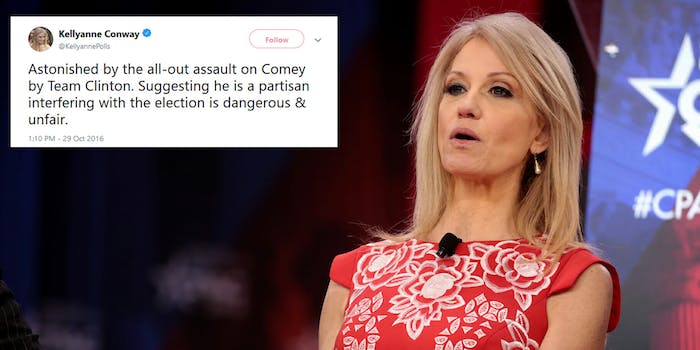 Guess it's not the same as the more recent attacks against Comey.

While President Donald Trump and other conservatives continue to try and discredit former FBI Director James Comey after his bombshell interview with ABC over the weekend, an old tweet from Kellyanne Conway shows that there might be some hypocrisy in their criticism.

In October 2016 Conway, now a senior member of the Trump administration, seemed aghast at the tension among Democrats surrounding Comey amid his investigation into Hillary Clinton‘s private email server. Clinton has said Comey’s letter to Congress about the investigation shortly before the election was a “determining factor” about her loss to Trump in the 2016 election.

Around the same time as Comey’s letter, Conway chimed in:

“Astonished by the all-out assault on Comey by Team Clinton,” Conway wrote. “Suggesting he is a partisan interfering with the election is dangerous & unfair.

Conway was on the offensive against the former FBI director on Monday morning, hours after ABC aired its sprawling interview with him where called Trump “morally unfit” to be president.

“I think he struggled to answer basic questions and he looked a little shaky,” she said on Good Morning America, later adding: “The president is very confounded that this person is always able to divert the spotlight to him.”

While Conway might have chastised an “all-out assault on Comey” back in 2016, conservatives clearly have a different view now that the FBI isn’t investigating Clinton.

In fact, there seems to be an “all-out assault on Comey” coming from the right as he prepares to release his book, A Higher Loyalty, tomorrow.

The Republican Party also launched a “LyinComey” website before the ABC interview that links to Democrats criticizing Comey and aims to discredit his claims.

Over the past few days, Trump has lit into Comey on Twitter, calling him “slippery,” claiming that he “committed many crimes,” and implying that the former FBI director and Andrew McCabe were the same person.