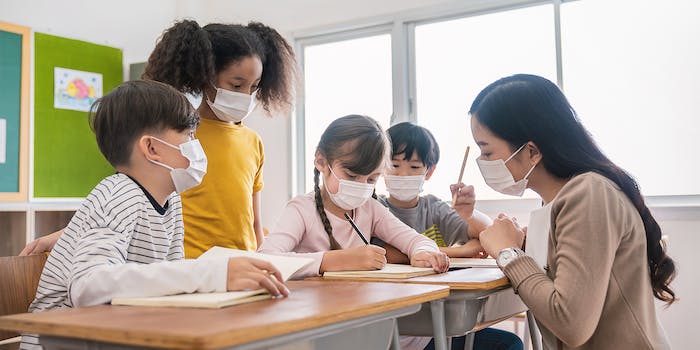 'The whole thing is a good reminder of how easily divided we’ve become.'

The online debate over mask policies in Texas has reportedly been bombarded with comments from overseas users in what could be a foreign influence operation.

The Austin Independent School District, as reported by Spectrum 1 News, says it noticed a surge in remarks from accounts in Kazakhstan while conducting a monthly analysis of its social media engagement.

The district has been at the center of widespread debate after it decided to mandate masks as the Delta variant of COVID-19 spreads across Texas.

The analysis, which focused in on the district’s social media profiles from July 20 to Aug. 18, found that users from Kazakhstan were the most engaged only behind users from the U.S.

While further analysis is needed, experts such as disinformation researcher Nina Jankowicz say it is not uncommon for foreign adversaries such as China or Russia to hire operatives in other countries to pose as Americans and sow discord online.

“I can tell you generally that foreign disinformation actors use preexisting fissures within societies in order to drive more discontent, more discord, and distrust in the system,” Jankowicz told Spectrum 1 News.

Jason Stanford, the chief of communications and community engagement for the district, argued that the findings showed how such debates can be used to divide Americans.

“The whole thing is a good reminder of how easily divided we’ve become,” Stanford told the news outlet. “A lot of time the local issues that can consume us also give others a chance to mess with us.”

If proven true, the incident wouldn’t be the first time that foreign adversaries have used the pandemic to create division.