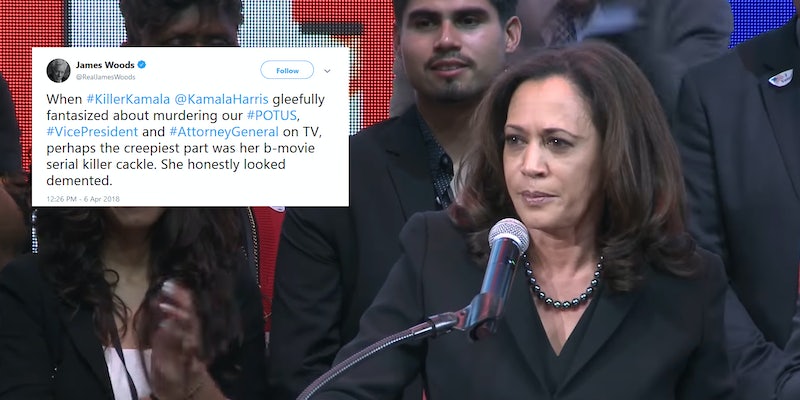 Sen. Kamala Harris (D-Calif.) is drawing criticism from right-leaning internet users after she laughed at a joke on during an appearance on the Ellen Degeneres Show on Wednesday.

Harris, who also played coy when asked about her potential 2020 presidential election run, laughed following a joke she made when Degeneres asked her a partisan question. During the interview, Harris said she wouldn’t answer questions about whether she is considering a run at the Democratic nomination for president during the 2020 election.

While a 2020 question may have elicited jeers from the right, Harris’ response to a question really set them off.

“If you had to be stuck in an elevator with either President Trump, Mike Pence or Jeff Sessions who would it be?” Degeneres asked the senator.

“Does one of us have to come out alive?” she asked, laughing and generating applause from the host.

The joke was not taken well by supporters of President Donald Trump on Twitter, with hyper-conservative actor James Woods calling the senator a “laughing hyena” and Fox News host Sean Hannity reportedly calling it a “shocking new low.”

When #KillerKamala @KamalaHarris gleefully fantasized about murdering our #POTUS, #VicePresident and #AttorneyGeneral on TV, perhaps the creepiest part was her b-movie serial killer cackle. She honestly looked demented.

If a senator like Ted Cruz joked about killing President Obama, he would be immediately forced to resign and ridiculed by the Left.

Kamala Harris jokes about killing Trump and liberals want to nominate her for the Dem 2020 candidate. SAD!

Yesterday, Kamala Harris suggested violence against POTUS, VP, and AG. This would not have been acceptable during Obama’s presidency, and it’s not ok now. pic.twitter.com/3LFcrTzXwl

If Harris does run in 2020, you can expect to see this brought up countless times before the election.