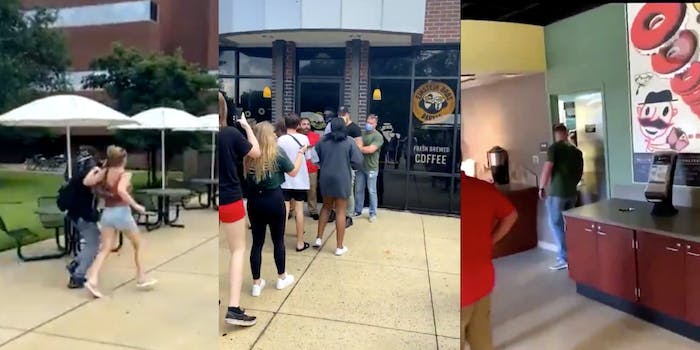 Videos show the ‘Kent State Gun Girl’ being chased and seeking refuge in an Einstein Bagels.

Kaitlin Bennett, also known as the Kent State Gun Girl, stirred controversy on a college campus after showing up without a mask.

Bennett, a popular conservative commentator, arrived at the University of Central Florida (UCF) on Thursday to film herself speaking with students while defending President Donald Trump.

But Bennett’s presence on campus quickly gave way to protests against not only her political agenda but against her alleged refusal to wear a mask.

“Wear your mask miss poopy pants,” @nataliakarina_ said, referring to a viral photograph in which Bennett is alleged to have defecated herself while intoxicated. “And with all offense possible never come to UCF again…”

It wasn’t long before Bennett was surrounded by students demanding that she leave the campus.

Bennett has claimed online that she was told that she did not have to wear a mask at UCF, despite policies from the school stating that face coverings must be worn.

In a statement on the matter, UCF said that Bennett eventually complied with the rule during her visit.

“The group on campus today was lawfully exercising their free expressions rights but not complying with UCF’s COVID-19 policy, which requires everyone on campus to wear a face covering,” UCF said. “Our policy was explained to the group, and after a period of time, the group complied and wore face coverings.”

Bennett responded to the statement by accusing the school of lying and, in turn, accused students of violating COVID-19 rules.

Later photographs and videos from the day do show Bennett wearing a Trump-themed mask while navigating through the school.

While internet rumors initially suggested that Bennett had been kicked out of the school for not wearing a mask, footage appears to show her fleeing the campus while surrounded by protesters.

Bennett even reportedly ran and hid inside the electrical room of an Einstein Bagels on campus in an attempt to escape the protesters.

Footage also shows her bodyguards shoving students as the group was leaving the school.

Despite numerous controversies, including leaked chats that purport to show Bennett making anti-semitic remarks, the conservative continues to remain a popular figure among Trump supporters.