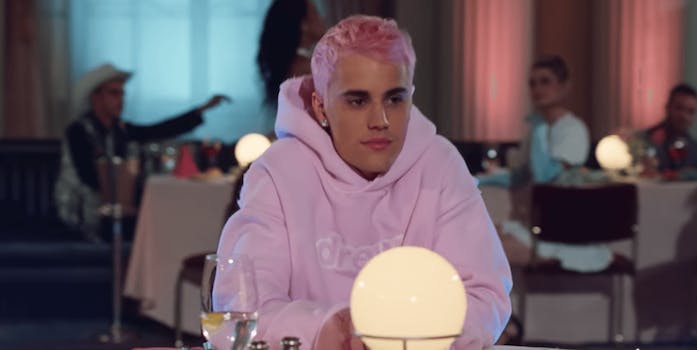 The innuendo is being read completely wrong.

Is Justin Bieber’s new music video the latest of a long line of Illuminati figures flaunting their horrible misdeeds? Or is it actually the reverse, a spotlight pointed squarely at the cabal and their child trafficking—the conspiracy that’s come to be known as “Pizzagate?”

Or is it just a terrible music video?

These are the competing questions being asked by conspiracy theorists all over the internet as they try to decode what the Canadian pop star is really saying with the video and marketing for his new single, “Yummy.”

Bieber had taken a long hiatus from music, returning after three years with the R&B track that Rolling Stone described as “a gooey-eyed look at married life.” As part of the marketing blitz for the song, which included online games and what looked like an effort by Bieber’s team to game the Billboard charts, Bieber posted a series of pictures of babies to his Instagram, along with #yummy.

While mainstream online gossip was that Bieber was teasing an upcoming birth announcement from him and his wife, that’s not what everyone thought.

Anything involving babies and the word “yummy” is going to bring out conspiracy theorists, who have spent the last few years dreaming up a cabal of baby-eating pedophiles at the highest levels of government, business, and entertainment. It’s the center of Pizzagate, and also one of the major pillars of the QAnon conspiracy theory, which spun off from Pizzagate and combined it with a number of other conspiracy tropes.

Pizzagate was born toward the end of the 2016 election, where online sleuths thought they discovered a secret code in Hillary Clinton’s emails, revealing a child trafficking ring in a D.C. pizza parlor.

Bieber has been the subject of conspiracy theories about his supposed Illuminati involvement before. Pretty much every one of serious stature in entertainment has been. But that’s a far cry from him flaunting his involvement in a baby-eating cult. And why would someone who actually was in a baby-eating cult flaunt it in the first place? That seems like a pretty good way to get arrested.

Many truly believed that the song and marketing were glorifying sexual acts with babies, with the r/conspiracy commenters called it disgusting, creepy, gross, and “normalization of the perverse.” Not everyone in the thread thought so, of course, with many simply writing it off as a dopey love song pitched with a gimmicky marketing campaign.

But conspiracy theories are rarely this simple, or easy to write off. So while some were claiming that Bieber was glorifying pedophilia, others were using the exact same material to draw attention to it. In particular, Bieber was seen as taking on the Pizzagate conspiracy and showing the world the sick, pedophilic underbelly of Hollywood.

In a popular r/conspiracy thread called Justin Bieber’s Yummy is about Pizzagate, a redditor tied it all together:

“At the beginning of the video you can see scared kids entertaining rich and elite adults, who happen to look like John Podesta and more,” the post begins, before jumping around to a range of other topics, including allegations of pedophilia that Bieber has supposedly leveled against music industry heavyweights. The post ties Bieber in with the sexual assault allegations against music producer (and Bieber mentor) Antonio Reid, Jeffrey Epstein’s death, Ricky Gervais’ monologue at the Golden Globes, and the suicide of producer and DJ Tim “Avicii” Bergling.

That death, in turn, has also been connected to supposed pedophile rings, along with the suicides of fellow musicians Chris Cornell and Chester Bennington, all without evidence.

The idea of Bieber using his comeback single to expose Pizzagate took a further step into the mainstream when it got picked up by Venzuelan YouTube star Dross Rotzank, who made a video called “El terrorífico mensaje subliminal de Justin Bieber,” or “the terrifying subliminal message of Justin Bieber.” The video, which racked up over 3 million views in just two days (Dross has over 18 million subscribers), is full of ominious music, an urgently yelling narrator, and plenty of references to Pizzagate, Podesta, Epstein, and others linked to supposed sex trafficking rings.

Because of Dross’ video, Pizzagate became one of the top trending topics on Spanish-language Twitter, and the notion of Bieber going after highly-placed pedophiles was picked up by a number of Spanish sites.

Beiber fans and Pizzagate believers alike dug in to connect the video to individual references in hacked John Podesta emails, along with admittedly weird comments from Reid that the teenaged Bieber was “beautiful like a woman” when Reid first discovered him.

It drove several other Bieber/Pizzagate related tweets to spread, getting thousands of retweets with claims that Bieber was “desperate” to tell the world what happened to him. Others brought up comments Bieber has made in the past, that the music industry is “controlled by the absolute worst kind of people — pedophiles.”

Ultimately, the controversy around the video hasn’t translated into the staggering commercial success Bieber has had in the past. It missed out on the top spot on the Billboard Top 100. Beyond that, it’s hard to see any of the Pizzagate imagery that conspiracy believers are pointing out, unless you already are looking for it—a form of confirmation bias. The closest the video gets to a “John Podesta lookalike” is an old man who doesn’t look anything like Podesta.

And Bieber’s supposed comments about the music industry being controlled by pedophiles were a hoax published by notorious fake news site “Your News Wire.”

But the Justin Bieber Pizzagate rumors will not die. In June, during an Instagram Live, conspiracy theorists thought Bieber confirmed they were true. That’s not what happened.