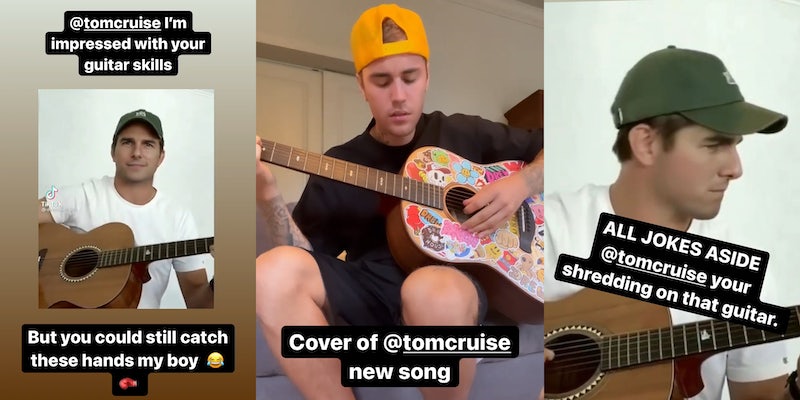 The pop singer repeatedly praised what he thought was a video of Cruise playing the guitar.

In numerous stories on his Instagram, Bieber praised the actor while sharing footage of what he believed was Cruise playing the guitar.

Tagging the official account of Cruise, Bieber stated that he was “impressed” with the actor’s musical chops before challenging him once again to a boxing match.

“@tomcruise I’m impressed with your guitar skills,” Bieber wrote. “But you could still catch these hands my boy.”

But the video referenced by Bieber actually originates from the TikTok parody account @deeptomcruise, which has racked up more than 2.9 million followers for its hyper-realistic deepfakes since first debuting in February.

The project is the brainchild of visual effects artist and deepfake creator Chris Ume, who uses his skills to digitally place the actor’s face onto that of prominent Cruise impersonator Miles Fisher.

The clip in which the deepfake Cruise appears to sing and play the guitar was first posted to TikTok on Aug. 29.

Yet despite widespread media coverage of the deepfake account, Bieber seemed unaware of the digital foolery at play as he continued praising the actual Cruise.

“ALL JOKES ASIDE @tomcruise your [sic] shredding on that guitar,” Bieber added.

Bieber even went on to follow up with a rendition of his own, playing what he described as a cover of Cruise’s new song over multiple stories on Instagram.

It wasn’t until two hours after his original post that Bieber appeared to realize that the video didn’t actually feature the famed actor.

Cruise has not publicly responded to Bieber’s misattribution. The pop star is far from the first person to be fooled by the popular TikTok account, although Ume has previously stated that his intention is not to trick viewers.

“The important thing is, we didn’t want to fool people at any moment,” Ume said in March. “If I can help in creating awareness, or even work on detection in the future, I would love to.”