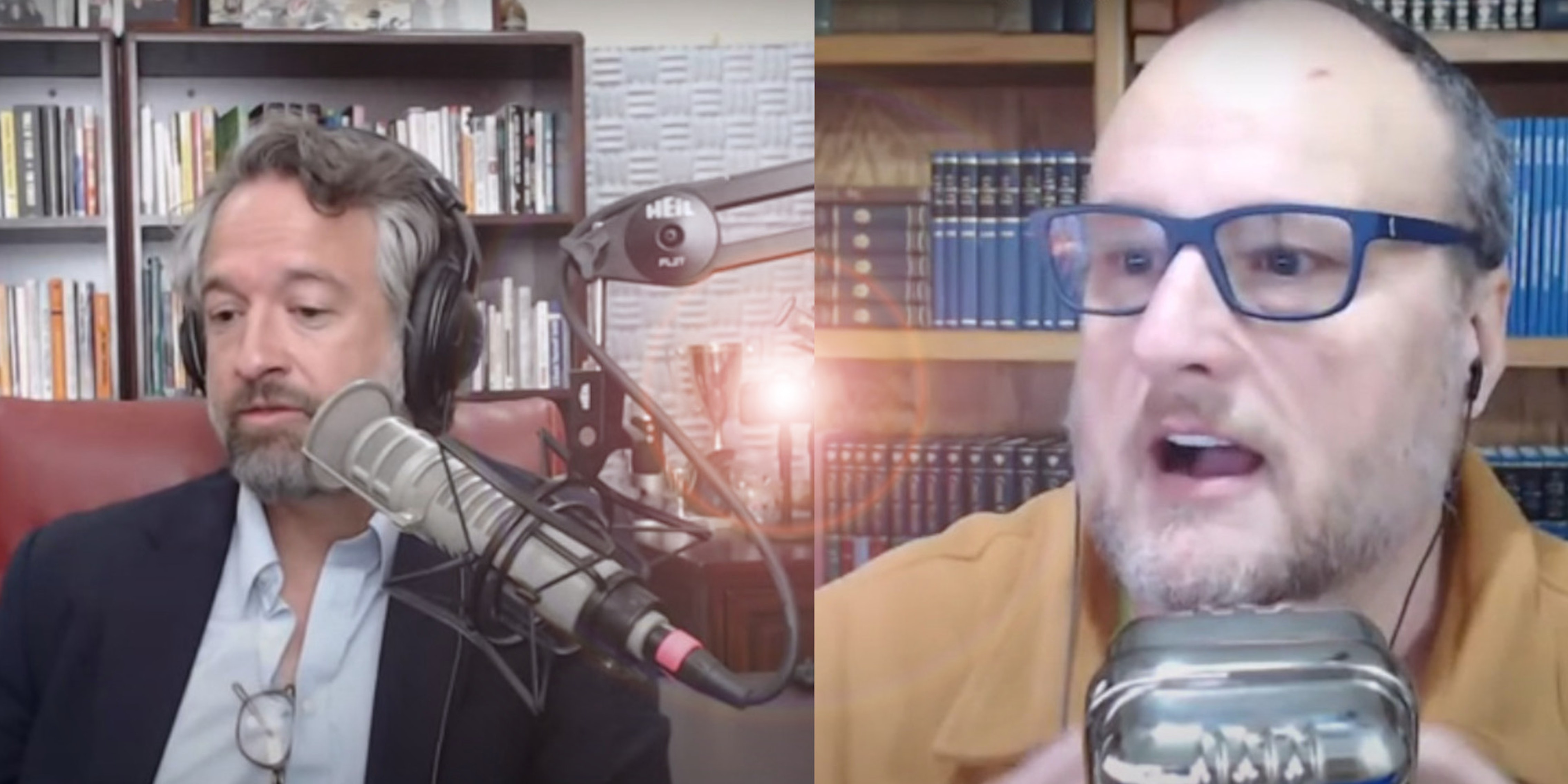 The new year finds online conspiracy theorists in disarray, as major figures wage war among themselves. There is doxing, threats, voicemails, and more as two camps debunk each others’ conspiracy claims.

For months there have been fissures among internet conspiracy theorists, including QAnon followers who believe the world is secretly controlled by a satanic cabal of pedophile cannibals.

The drama has recently come to a head. It began when presenters and attendees fell ill after the QAnon-friendly ReAwaken America Tour. Rather than blame the apparent cause, COVID-19, they convinced themselves it was an anthrax attack.

Jovan Hutton Pulitzer was among those sickened who spread the anthrax rumor. Pulitzer is also purportedly a key person behind the PowerPoint that former President Donald Trump’s team consulted as it strategized on how to overturn the 2020 election. He’s been an ongoing source of election conspiracies.

Clay Clark, who organized the ReAwaken America Tour, called the anthrax claim nonsense. Clark also iterated that he isn’t a member of the “illuminati,” a term used interchangeably with “cabal.”

This isn’t the only rift Pulitzer is involved in. Pulitzer is currently at war with David Clements, an anti-vaccine former professor who’s become a source of election conspiracy theories.

The two were on good terms until very recently. On Tuesday, Clements posted “prayers of protection” for Pulitzer and others sickened at the ReAwaken America Tour. Clements apparently bought the claim that there was some kind of attack. It’s unclear why this produced bad blood, but since then the two have exchanged barbs on social media.

Since then, they’ve taken to doxing each other, debunking one another’s conspiracy theories, and even doxing one another’s supporters who contact them. Their combined 200,000 Telegram subscribers are lining up behind them, as are others.

“The infighting amongst the stop the steal crowd was put on hold thanks to anthrax-gate, but now that people are feeling better, the gloves are back off,” @get_innocuous tweeted on Wednesday.

(SharpieGate refers to Pulitzer’s false claims that markings outside the ovals on Arizona ballots were evidence of fraud.)

Pulitzer seems to have struck the first blow. On Wednesday, he posted images on his Telegram channel referring to Clements as an “example of our sloppy half ass nature in fighting this battle to take our country back.”

Clements hit back on Telegram, where he goes by the Professor’s Record. He wrote of Pulitzer’s claims about markings on ballots in Arizona, “How many millions of dollars were needlessly spent on a scanning show?” He also demanded a full accounting of the funds Pulitzer spent.

It escalated from there. Clements says Pulitzer falsely accused him of being a convicted felon and posted his cell phone number. When Pulitzer refused to take it down, Clements retaliated by posting his.

“Please do me a favor and ask Jovan via text to remove my personal cell. He can be reached at…” he wrote.

Since then, Pulitzer has posted voicemails and screenshots, including their phone numbers, of people sending him texts like, “Your career = done,” and, “Leave David alone. Watched you speak this summer. Knew you were related to Satan.”

They’ve also continued attacking one another on their respective channels. “God is watching me. How do I know? Well Jesus’s personal assistant Little Davey Clements told his chlamydiaites so!” Pulitzer posted on Thursday.

Their tens of thousands of subscribers have lined up behind them, as have other influencers in the space.

L. Lin Wood has publicly indicated support for Clements. Pulitzer claims that Joe Flynn, the brother of QAnon hero Michael Flynn, is on his side. Wood also believes the Flynns support Pulitzer in the rift.

“Looks like Mike Flynn is a follower of Jovan Pulitzer. Jovan and the Deep State Mockingbird Propagandists are currently attacking Professor David Clements,” Wood wrote on Telegram on Wednesday. “Do the research. Connect the dots. Draw your own conclusions.”

Their feud is threatening to tear conspiracy theorists’ world apart.

There is hope that they may ultimately reconcile. The two were supposed to air their grievances on New Year’s Eve. The debate has since been rescheduled for Jan. 2.

But there’s also a chance it won’t happen at all. On Saturday, Pulitzer claimed that Clements had changed the terms without consulting him.

“I possibly expect Clements not to show considering this new tactic and it may have [to] both be no shows,” he wrote.

In a subsequent post, Pulitzer said that if Clements doesn’t show, he’ll do a presentation of his findings from the Maricopa County, Arizona audit that are “releasable.”

“You will know which event you will be watching based on the opening image on the screen at the time of the broadcast.”