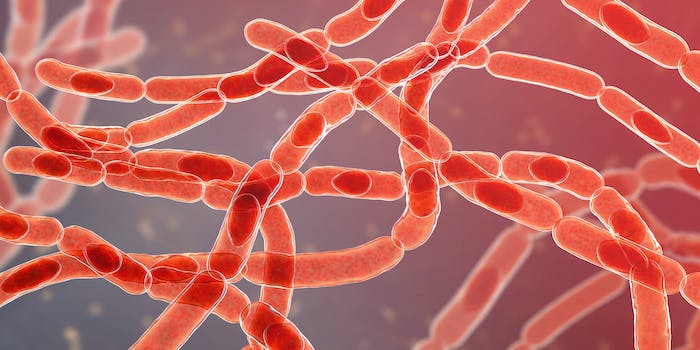 COVID is a far more likely cause of their illness.

A slew of presenters and attendees from the ReAwaken America Tour reportedly fell ill shortly after the event. Rather than COVID-19, they’re claiming their illness was possibly caused by an anthrax attack.

Now Oltmann, Pulitzer, and a purported dozen others who were in a green room together are sick. Their illness comes as the omicron variant of COVID ravages the nation.

The conspiracy theory that Oltmann’s, Pulitzer’s, and others’ illness was caused by an anthrax attack emerged in recent days.

Oltmann is a far-right figure who’s espoused QAnon theories but denies he follows QAnon. Last week, Jake Angeli, better known as the QAnon Shaman, appeared on Oltmann’s podcast while still incarcerated for his role in the Capitol riot. Colorado Newsline reports that earlier this month Oltmann called for mass hangings of Coloradan lawmakers who voted to approve a stopgap spending bill.

Pulitzer is another extremist who’s spread false claims of election fraud. The PowerPoint presentation that former chief of staff Mark Meadows received detailing strategies to overturn the 2020 presidential election appears to be based on his ideas, per the New York Times. It’s not clear who authored the presentation.

Earlier this week, Oltmann said on his podcast that he was sick. “There’s a 99.9% chance it’s anthrax,” he said.

The rumor has spread like wildfire throughout QAnon circles. Lin Wood, Ron Watkins, and Jeffrey Pederson (aka InTheMatrixxx) are among the prominent QAnon figures who have repeated it.

Claims are circulating that some are seriously ill or even hospitalized.

The anthrax poisoning claim made its way onto fringe media outlets on the far-right.

In what could be evidence of further rifts in QAnon world, Clay Clark, an organizer of the ReAwaken America Tour, denies that there was an anthrax attack. Appearing on a far-right online talk show, Clark addressed rumors that anthrax was sprayed from the ceiling. He said that was actually a fog machine brought in by the church where the Dallas event was held.

Clark further denied that he’s part of the “illuminati.”

The symptoms of anthrax poisoning and COVID are nearly identical, per the Centers for Disease Control and Prevention (CDC). Both cause fever, chills, body aches, cough, shortness of breath, and nausea.

COVID symptoms can begin anywhere from two to 14 days after exposure to the virus, according to the CDC. Anthrax can take a day or more than two months to cause illness.

Given that the United States is in the midst of an outbreak of the omicron variant of COVID, it’s far more likely that those who are ill caught COVID at the ReAwaken American Tour than that someone managed to spray aerosol anthrax in the green room.

QAnon conspiracy theorists and far-right figures are often anti-vaccine and/or claim COVID is a hoax or greatly exaggerated.

People are offering the afflicted prayers, medical advice, and other suggestions. One raged, “So frightening that anyone who speaks the truth is being attacked by Deep State operatives…using nefarious and deadly vehicles.”

Nearly all appear to believe that the illnesses were caused by anthrax rather than the deadly virus that’s killed nearly 1 million Americans in the last two years. Annually, anthrax cases in the United States number in the single digits.

On Wednesday morning, Oltmann wrote on Telegram that Pulitzer had contacted him. He said Pulitzer had tested negative for anthrax and claimed he has “weird symptoms so no idea what he has.”

Some of Oltmann’s subscribers still believe that they were targeted at the ReAwaken America Tour.

“Praying for Jovan and whatever sinister illness these demons have released against you both and anyone else who attended the conference,” wrote one.