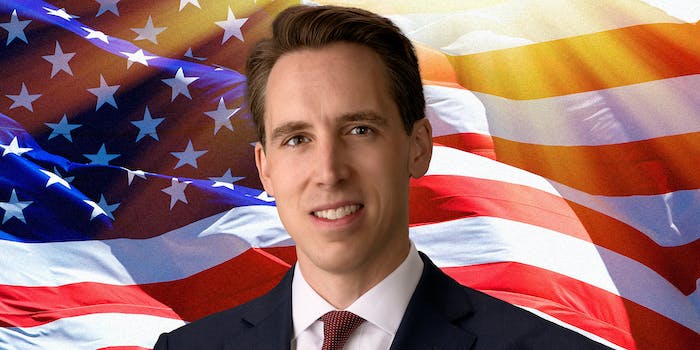 'Should be the 'Hallelujah Amen America Is Best Ever Hawk Eagle Patriot Apple Pie Act.''

Sen. Josh Hawley (R-Mo.) is the latest conservative politician to take the culture wars to the schools. On Thursday, Hawley announced that he will introduce a bill that bans critical race theory and requires schools to teach kids about the Constitution, Bill of Rights, and Declaration of Independence. Schools that violate the “Love America Act” will lose federal funding.

“The Left wants to teach our kids that America is systemically racist. That’s false and it’s meant to divide. It’s time to replace lies with the truth!” Hawley tweeted. “Let’s teach our kids what unites us as Americans – what we love together. Let’s teach them the truth,” he added.

The internet is not here for it. The Love America Act was widely panned online, in part because schools already teach about the nation’s founding (some might say exhaustively). And partly because primary schools do not teach critical race theory, an academic theory that examines United States law and history through a lens that includes the influence of slavery and systemic racism. It’s mostly taught at law schools and universities.

Conservatives have nevertheless made critical race theory, often abbreviated to simply “CRT,” a primary front in their war against what they view as excessive wokeness. In their view, it’s racist to teach about racism.

The Love America Act is among more than a dozen pieces of legislation targeting critical race theory in schools at the state level, NBC News reports.

Twitter users wasted no time dunking on Hawley and the Love America Act.

“In China they call this ‘patriotic education,'” opined @DrLeeJones, one of many to suggest that the bill has fascist leanings.

Others suggested additional legislation, such as the “Cheerleaders Have to Date Me Act,” “Hallelujah Amen America Is Best Ever Hawk Eagle Patriot Apple Pie Act,” and the “You Must Love America Or Else Act.”

Hawley is among those who said he would challenge election results ahead of the Capitol riot, where a mob of Trump supporters stormed the Capitol and attempted to stop the election from being certified.

In light of this, some felt it ironic that he’d introduce a bill about loving America.

The dragging continued on Friday. “The Love America Act is 10 times more cringe than anything Lin-Manuel Miranda could come up with,” tweeted Sam Sacks of the District Sentinel.

The Love America Act has little chance of passing the Democrat-controlled Congress.