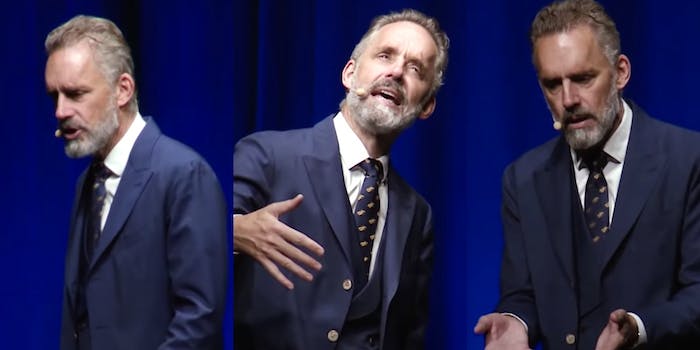 The right-wing star is getting dragged on main.

It had been recently announced that Penguin Random House Canada would be publishing Beyond Order: 12 More Rules for Life by Peterson. The portfolio will also publish the book in the U.S. and Penguin Press in the United Kingdom. All entities are components of the Penguin Random House umbrella.

According to Vice News, four employees, who remain anonymous due to employment concerns, said Random House Canada held a town hall about Peterson’s Beyond Order where executives defended the decision to publish Peterson’s book. Numerous employees “cited their concerns about platforming someone who is popular in far-right circles.”

“He is an icon of hate speech and transphobia, and the fact that he’s an icon of white supremacy, regardless of the content of his book, I’m not proud to work for a company that publishes him,” said a junior employee who attended the town hall, and is also a member of the LGBTQ community.

According to Vox, Peterson, long a proponent of what could be called puritanical toxic masculinity, is a “right-wing internet celebrity who has claimed that feminists have ‘an unconscious wish for brutal male domination,’ referred to developing nations as ‘pits of catastrophe’ in a speech to a Dutch far-right group, [and also] told a [New York Times] reporter that he supported ‘enforced monogamy.'” He’s also claimed that white privilege doesn’t exist, along with numerous other awful ideas on race and race relations.

The publishing house has not released details on how it will respond to the critical feedback, though the book continues to track for a March release.

Another employee told Vice News that “people were crying in the meeting about how Jordan Peterson has affected their lives.” They said a fellow employee discussed how Peterson “had radicalized their father.” Another employee talked about how the book would “negatively affect” a non-binary friend.

This same employee said: “The company since June has been doing all these anti-racist and allyship things, and them publishing Peterson’s book completely goes against this. It just makes all of their previous efforts seem completely performative.”

A third employee told Vice World News the company’s diversity and inclusion committee obtained “at least 70 anonymous messages about Peterson’s book,” with very few in favor of its publication.

In a statement to Vice News, the publishing house responded: “Our employees have started an anonymous feedback channel, which we fully support. We are open to hearing our employees’ feedback and answering all of their questions. We remain committed to publishing a range of voices and viewpoints.”

In light of the controversy, memes and tweet threads about Peterson have trended online.

However, many online believe the publishing of his book is much ado about nothing, or believe that those complaining about the book need Peterson in their lives.

There is a particular irony about a second volume, 12 More Rules for Life, coming to light, reinforcing the (patently untrue) notion that Peterson has it all figured out. Just a year ago, he sought rehab for a Klonopin addiction and cried about Twitter bullies. Neither are joking matters in vacuums; however, Peterson isn’t held to the same rigid ideas of personal responsibility that he preaches.

As @conceptualsaeen tweeted: “[Saying] it’s cruel to mention Jordan Peterson’s benzo addiction misses the point. that he lived by his uncompromisingly joyless, puritanical rules that fetishised suffering over empathy & kindness & ultimately led to his ruin is a damning indictment of rules he professes to uphold.”

In 2018, the Daily Dot attended a Peterson event and described the “classical liberal‘s” influence thusly: “Beyond the flowery language and smooth, Willy Wonka-esque mannerisms, he’s empowering fringe ideas on social media. And Peterson seems to think there’s only a matter of time before society collapses on itself—and it’s up to him to save the world, rule by rule.”