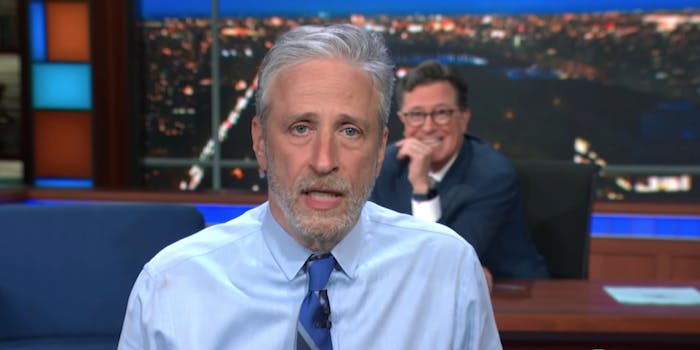 'Jon Stewart is going to end up having persuaded more people of the lab leak theory than all the scientists of the world combined.'

Comedian Jon Stewart received widespread praise from prominent conservatives on Tuesday after mentioning the coronavirus “lab leak” theory during an appearance on The Late Show with Stephen Colbert.

In Colbert’s first show back in-studio since the pandemic began, Stewart devoted much of his time discussing the belief that the virus had leaked from a laboratory at the Wuhan Institute of Virology in China.

While still totally unproven, the theory is now being viewed by many scientists as plausible after initially being referred to as a debunked conspiracy theory.

Stewart began by stating that humanity owed a “great deal of gratitude to science” for “easing the suffering of this pandemic” before sarcastically stating that the outbreak “was more than likely caused by science.”

The comedian also made numerous references to the name of the lab, suggesting that its work in analyzing coronaviruses made it a likely origin for COVID-19.

While Stewart may have been joking in part after telling Colbert to “stop with the logic and people and things,” the talk show appearance quickly spurred partisan responses on Twitter.

Prominent conservatives such as Meghan McCain, a co-host on ABC’s The View, applauded Stewart’s approach to late-night comedy.

“One of the reasons Jon Stewart was so talented is that he spoke truth to power no matter who was in office and was beholden to no party,” Meghan McCain wrote. “This is how political comedy is done right. No one else on tv does this anymore. No one.”

But not everyone was supportive of Stewart’s late-night rant. Progressive Twitter users pushed back on the comedian’s remarks by noting that the lab leak theory had still not been proven. Some even accused Stewart of being racist for his apparent support of the theory.

President Joe Biden late last month ordered intelligence agencies to double down on efforts to investigate COVID-19’s origins, including the possibility that it could have leaked from the Wuhan-based lab.

Beijing has denied that the virus originated due to a leak and has repeatedly spread a theory of its own that the virus instead came from a U.S.-based lab.