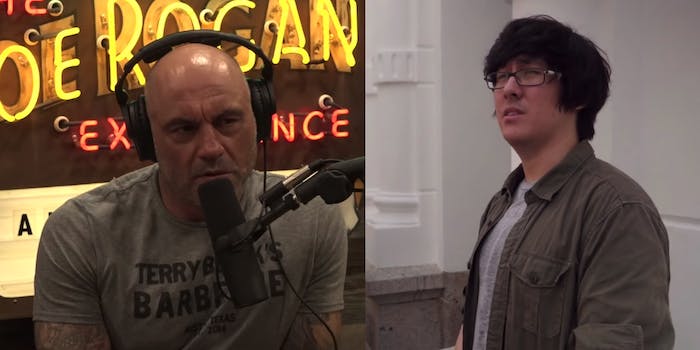 Rogan is being accused by Watkins' followers of working for the 'deep state.'

Comedian Joe Rogan took aim at former 8chan administrator Ron Watkins on Tuesday during an episode of his popular podcast.

While interviewing frequent guest Lex Fridman, a scientist and researcher in the field of artificial intelligence (AI), Rogan began discussing the HBO documentary series “Q: Into the Storm.”

The six-episode series, which debuted in March, breaks down the history of QAnon and suggests that Watkins could have been behind the mysterious “Q” figure at the center of the conspiracy theory.

Supporters of QAnon believe that an individual or team of “military intelligence” officers were dropping clues on the far-right message board run by Watkins that detailed former President Donald Trump’s secret battle against a cabal of child-eating pedophiles.

As noted on Twitter by the documentary’s creator Cullen Hoback, Rogan took issue with Watkins’ glasses before calling the former 8chan administrator a “nerd.”

“I don’t like his glasses. Why does he got taped-up glasses?” Rogan asked. “It’s just too on the nose. I bet those glasses are clear. I bet he doesn’t even need them.”

Watkins later responded to Rogan’s remark on his Telegram channel, which is followed by more than 395,000 users by clarifying that his glasses did not have tape on them.

“It is dental floss, not tape,” Watkins wrote.

Watkins’ cult-like followers, however, were less kind in their responses. A chat room dedicated to Watkins on Telegram was quickly filled with angry remarks and accusations that Rogan was working for the “deep state.”

Watkins has not weighed in any further on Rogan’s comments thus far. It also remains unclear whether Watkins’ followers will hold a grudge.

The situation comes as Watkins continues to command a significant following online by spreading conspiracy theories about the 2020 election and alien spacecraft.