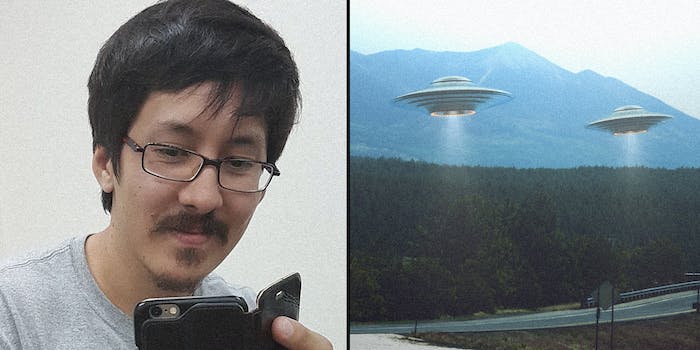 Watkins' removed the video's metadata, which would reveal when and where it was taken.

Former 8chan administrator Ron Watkins claims to have spotted a UFO in footage shared to his Telegram channel on Sunday.

The video, as first reported by VICE News, purports to show a “Tic Tac” UFO flying over Watkins’ home in Hokkaido, Japan.

“I was just out on my deck looking up at the sky and I saw one of those Tic Tac UFOs flying slowly overhead,” Watkins said. “Grabbed my phone and took some pretty quality video of it before it flew behind my neighbors house and out of sight.”

Watkins also claims that the object was followed by a “military reconnaissance craft,” which was not captured on video. The aircraft, Watkins further added, had “no visible propulsion system” and gave off “no sound.”

As noted by VICE News, Watkins, who is suspected by many of being behind the QAnon conspiracy theory, appears to have deleted the video’s metadata—which could have revealed where and when it was taken.

Watkins’ footage was largely rejected by his followers, who accused the far-right figure of distracting from election fraud conspiracy theories.

“Very disappointed with CM on the Alien promoting and the distraction from the audits and voter fraud,” one Telegram user said, referencing Watkins’ username CodeMonkeyZ.

Watkins currently commands more than 284,000 followers on Telegram. In comparison, the channel for AlienLeaks has only managed to garner 55,000 followers.