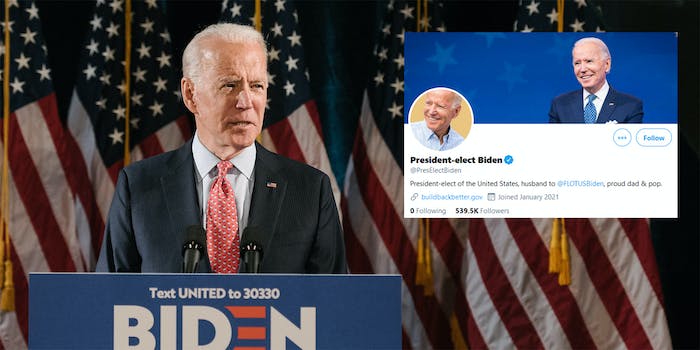 Biden made a new account that will become @POTUS on Wednesday afternoon.

Biden and Twitter made announcements late Thursday about how the accounts will transfer to the incoming president from President Donald Trump, whose @realDonaldTrump account was suspended last week following the Capitol riots.

On Thursday evening, Biden tweeted for the first time from @PresElectBiden, which will transfer to @POTUS after he is inaugurated next Wednesday.

“Folks—This will be the account for my official duties as President. At 12:01 PM on January 20th, it will become @POTUS. Until then, I’ll be using @JoeBiden. And while you’re here, follow @FLOTUSBiden @SenKamalaHarris @SecondGentleman and @Transition46,” Biden tweeted.

Twitter went on to explain that the “institutional accounts” used by the Trump administration like @POTUS will be transferred to @POTUS45, much like former President Barack Obama’s official account became @POTUS44 for archiving purposes.

The company also said several incoming members of the administration, including Vice President-elect Kamala Harris will also have their accounts transferred to the government ones.

@Transition46 will become @WhiteHouse, @SenKamalaHarris will become @VP, @FLOTUSBiden will become @FLOTUS, and @PressSecPsaki (incoming Press Secretary Jen Psaki), will become @PressSec, the company said. While the account names will transfer, the tweets, account history, and followers will move to the archive accounts.

Last month, Biden’s transition team raised criticism over Twitter allegedly telling them that it would be nuking the @POTUS account’s followers. Rob Flaherty, the digital director for Biden, wrote in a tweet that Twitter “informed us that as of right now the Biden administration will have to start from zero.”

Flaherty and a Twitter communications employee also got into a back-and-forth about it on the site.

Yesterday, amid the launch of Biden’s new account, Flaherty again criticized the decision by Twitter, noting that other social media sites were not making the same decision.