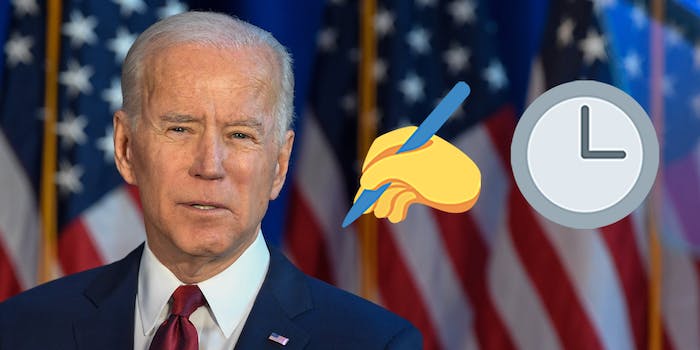 Why people are tweeting clock emoji at Biden

The trolling has been signal-boosted by Sanders fans.

If you are extremely versed in leftist online culture (which at this point in the 2020 cycle, who isn’t), you’ll have noticed that certain Democratic candidates inspired specific emoji that then flood the replies of their tweets.

For Pete Buttigieg, it was a rat, both a derogatory shot at his appearance and the idea that he would scurrilously shift policies and positions whenever it suited him.

For Sen. Elizabeth Warren (D-Mass.), it was a snake, which came to prominence after her team (most likely) leaked a conversation between her and Sen. Bernie Sanders (I-Vt.) about the possibility of a woman president.

Now, the contest has narrowed between Sanders and former Vice President Joe Biden. And conversations about Biden are getting hit with emoji of clocks.

It’s also popped up in Twitter handles of Sanders supporters.

The meme itself got a big boost when it was declared the official response by the left-leaning podcast Chapo Trap House.

The emoji stems from the current ongoing debate (or disagreement or attack, whatever you want to call it), about Biden’s mental health.

Biden has not been diagnosed with any sort of mental health problem, but people have speculated that his rambling sentences are a symptom of dementia. Others have pointed to his history of stutters, saying his public speaking is no different than it previously was.

The clock emoji comes from a neuroscience test that asks patients possibly suffering from cognitive decline to draw an analog clock.

According to the test, patients with dementia and Alzheimer’s struggle to properly record time on the clock face. While not proof of anything, a poorly drawn clock can be a reason to further test a patient.

Hence, the repeated clock and hands with pencils tweeted at Biden. They’d like to see him show he’s mentally fit for office.

It’s a question that’s been raised repeatedly in the past year of Democratic debates, where Biden has struggled to finish his thoughts, but the debate was ramped up this week when a 2016 clip of Biden supporting Sanders started to go viral.

Many pointed out his cogent defense of Sanders compared poorly to his public performance of late.

And because Biden recently assumed the mantle of Democratic front-runner this week, the discourse around it has ramped up. Sanders supporters—who have long flagged Biden’s stumbles—continued to press the matter.

Additionally, President Donald Trump—who has also repeatedly pointed to Biden’s mental health—shared a clip of Biden saying we can only “re-elect Donald Trump.”

It’s a debate that’s been going since Biden started to run, but has been flagged in some publications as some sort of massive disinformation campaign.

Washington Monthly declared that the “disinformation campaign” has begun, highlighting a document that circulated around Sanders supporters who mentioned his “obvious cognitive decline,” which the Sanders campaign disavowed.

There’s no doubt that Sanders supporters are trying to highlight and press the issue.

But you’d only be surprised by the line of attack if you haven’t been paying attention, as other candidates have flagged it as well throughout the primary.

And with a current president who mainstream Democrats repeatedly accused of having dementia, it only seems reasonable to fairly interrogate their own front-runner, whether they want to or not.