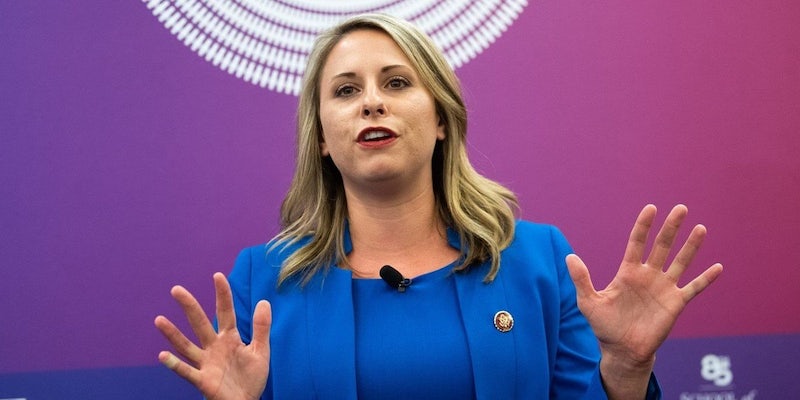 Update 9:45am CT, Oct. 28: On Sunday night, Rep. Katie Hill (D-Calif.) announced she was resigning in the wake of the controversy. In a letter she shared with her constituents, Hill said she was doing so with a “broken heart.”

Freshman Rep. Katie Hill (D-Calif.) is considered one of the rising stars of the Democratic party. Elected in the “pink wave” of the 2018 midterms, Hill seemed to embody everything Democrats want in a 21st-century candidate: intelligence, poise, progressive policies, and diversity—she’s one of the first and only openly bisexual congresspersons.

Yet bombshell allegations, first published by the conservative blog Red State last week, that Hill had sexual relationships with a male staffer and a female campaign aide now threaten to derail her promising career. Hill has since admitted to having a relationship with the campaign aide, apologizing to constituents in a letter calling her conduct “inappropriate” and against “my better judgment.”

The relationship with the aide was reportedly a “throuple,” or a consensual romantic relationship between more than two people, involving both Hill and her husband Kenny Heslep, from whom she is estranged. The relationship reportedly ended late last spring, just before Hill filed for divorce.

Hill categorically denies Heslep’s accusation that she was sexually involved with Graham Kelly, her legislative director.

The House Committee on Ethics has opened an investigation into an alleged affair with Kelly, which would run afoul of new rules prohibiting members of Congress from having sexual relationships with staffers (no rule prohibits such with campaign staff). Hill has said that she welcomes the investigation, and categorizes the allegations as a political hit job. There is no proof of Hill having an improper relationship with Kelly. Hill has blamed the controversy on “abusive husband” Heslep, per Politico.

After the initial story broke, British tabloid the Daily Mail took it several steps further by publishing nude photos of Hill, 32, who is in the midst of a contentious divorce from Heslep. In one of the nude images, Hill holds a bong; in another, she is brushing the campaign aide’s hair. The tabloid also alleged that Hill has a “Nazi-era tattoo.” The tattoo visible in the blurry picture could easily be described as a four-leaf clover; it could also be photoshopped. Hill characterizes the accusation that she has a Nazi tattoo as “false and defamatory.”

Through her attorneys, Hill subsequently sent the Daily Mail a cease-and-desist ordering it to remove the nude photos. “Intimate photos of me and another individual were published by Republican operatives on the internet without my consent,” she said in a written statement. Hill added that she has notified Capitol Police, who are investigating. “Distributing intimate photos with the intent to publish them is a crime, and the perpetrator should be punished to the full extent of the law.” As of late Friday morning, the photos remained on the site. The images were widely distributed on social media.

Katie Hill attacked by the right

Far-right internet personalities and reporters rushed to condemn Hill on social media. Some characterized her as hypocritical for opposing the confirmation of Supreme Court Justice Brett Kavanaugh over the sexual assault allegations against him. (Hill has not been accused of non-consensual sexual conduct.) Conservative media made much of the fact that Hill’s campaign aide received a salary.

Others, including some Republicans, defended her. Rep. Matt Gaetz (R-Fla.) tweeted, “This is just absurd. The only person who seems to have a gripe is @RepKatieHill’s soon-to-be ex. Who among us would look perfect if every ex leaked every photo-text? Katie isn’t being investigated by Ethics or maligned because she hurt anyone–it is because she is different.”

Is anyone claiming that Katie Hill abused her position and/or engaged in coercive conduct? If not, there's no reason for the whole world to know about her private sexual affairs. And yes, I'd say the same thing about a man

Katie Hill’s story is not an aberration.

Hill has reportedly told congressional colleagues that she has no intention of resigning.