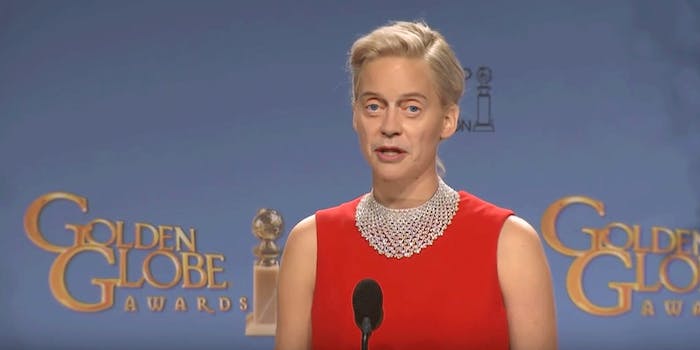 Jennifer Buscemi is the deepfake that should seriously frighten you

The ability to develop high-quality fake videos is becoming much easier.

While the nation grapples with concerns over the spread of inaccurate and deceptive information online, deepfakes—videos in which an individual’s face is superimposed onto another—continue to advance at a quickening pace.

Now, the new ones are downright terrifying.

I've gone down a black hole of the latest DeepFakes and this mashup of Steve Buscemi and Jennifer Lawrence is a sight to behold pic.twitter.com/sWnU8SmAcz

The technology, which relies on machine learning and artificial intelligence, was once largely relegated to researchers at prestigious universities. But over the past few years, a growing online community has democratized the practice, bringing powerful and easy-to-use tools to the masses.

As reported by Motherboard’s Samantha Cole, members of the now-banned subreddit explained how they would first gather stock photos and videos of celebrities such as Hollywood star Scarlett Johansson. That media content would then be fed into specialized, open-source tools and combined with graphic adult content.

The quality of deepfakes are based on several factors but rely heavily on practice, time, and the source material they are derived from. Initially, deepfakes were more shocking than convincing, but readily available programs and tutorials continue to lower the bar for new creators.

One such video, posted by Reddit user VillainGuy earlier this month, has highlighted how far the technology has come. That video—which combines actor Steve Buscemi with actress Jennifer Lawrence at the 2016 Golden Globe awards—is turning heads. Not because anyone believes it is real, but because of the video’s implications.

Utilizing a free tool known as “faceswap,” VillainGuy proceeded to train the AI with high-quality media content of Buscemi. With the aid of a high-end graphics card and processor, “Jennifer Lawrence-Buscemi” was born. VillainGuy says the level of detail was achieved thanks to hours of coding and programming as well.

The video’s viral spread online Tuesday comes as numerous U.S. lawmakers sound the alarm over the potential of deepfakes to disrupt the 2020 election. A report from CNN indicates that the Department of Defense has begun commissioning researchers to find ways to detect when a video has been altered.

Late last year, Rep. Adam Schiff (D-Calif.) and other members of the House of Representatives wrote a letter to Director of National Intelligence Dan Coates to raise concerns over the possible use of the technology by foreign adversaries.

“As deep fake technology becomes more advanced and more accessible, it could pose a threat to United States public discourse and national security, with broad and concerning implications for offensive active measures campaigns targeting the United States,” the letter stated.

Researchers have already developed some methods for detecting deepfakes. One technique, which is said to have a 95 percent success rate in catching altered videos, relies on analyzing how often an individual in a video blinks.

“Healthy adult humans blink somewhere between every 2 and 10 seconds, and a single blink takes between one-tenth and four-tenths of a second,” Siwei Lyu, Associate Professor of Computer Science from the University at Albany, wrote in Fast Company last year. “That’s what would be normal to see in a video of a person talking. But it’s not what happens in many deepfake videos.”

Deepfakes, unfortunately, will only become harder to catch as time progresses. Lyu notes that the race between those generating and those detecting fake videos will only intensify in the coming years.

While lawmakers have focused heavily on the potential national security ramifications of deepfakes, some experts remain skeptical. Thomas Rid, professor of strategic studies at Johns Hopkins University’s School of Advanced International Studies, remarked on Twitter this month that fake news and conspiracy theories already thrive based on far less than altered videos. Rid, an expert on the history of disinformation, argues, however, that deepfakes could lead some to deny legitimate information based entirely on the fact that such technology exists.

“The most concerning aspect is, *possibly*, ‘deep denials,’ the ability to dispute previously uncontested evidence, even when the denial flies in the face of forensic artifacts,” Rid wrote.

Although fears concerning deepfakes and subversion from malicious foreign actors draw attention in the nation’s capital, fake videos could potentially cause much more damage to individuals. Granted, a fake video of a politician engaged in some sort of devious behavior could spread rapidly online before being debunked. But if a similar altered video is used to blackmail a vulnerable person, it’s likely no credible fact-checkers will be there to put out the fire.

The practice of targeting ordinary women with fabricated videos has already begun. In one such example, a woman in her 40s told the Washington Post that just last year someone had used photos from her social media accounts to create and spread a fake sexual video of her online.

“I feel violated—this icky kind of violation,” the woman said. “It’s this weird feeling, like you want to tear everything off the internet. But you know you can’t.”

And those unwilling to take the time to learn how to develop their own deepfakes can simply pay to have it done for them. A now-banned community on Reddit known as “r/deepfakeservice” was found to be selling such content in early 2018 to anyone willing to provide at least two minutes of source video.

Obviously, no one thinks Steve Buscemi and Jennifer Lawrence morphed together at the Golden Globes. But videos based on more believable premises with even higher quality are coming, and the damage they do will depend on how we react.