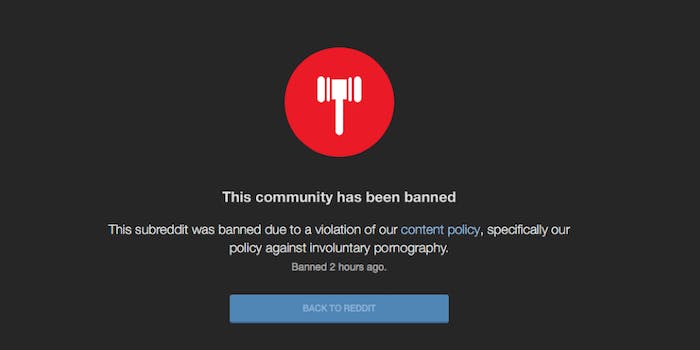 The rise of 'deepfakes' forced Reddit to take action.

“Reddit prohibits the dissemination of images or video depicting any person in a state of nudity or engaged in any act of sexual conduct apparently created or posted without their permission, including depictions that have been faked,” Reddit’s updated rules proclaim. “Additionally, do not post images or video of another person for the specific purpose of faking explicit content or soliciting ‘lookalike’ pornography.”

To Reddit’s credit, though, the site acted more quickly on deepfakes than it has on other problematic sexual content in the past. The site’s most notorious scandal involved “creepshots,” candid photos of women, including upskirts, snapped in public without their knowledge. Reddit was slow to act on creepshots, only taking decisive action after the website Gawker unmasked the site’s biggest creepshots moderator, ViolentAcrez.

Today’s rule change, under the headline “Do Not Post Involuntary Pornography,” reiterates the ban on creepshots.

“Images or video of intimate parts of a person’s body, even if the person is clothed or in public, are also not allowed if apparently created or posted without their permission and contextualized in a salacious manner (e.g., “creepshots” or “upskirt” imagery),” it reads.