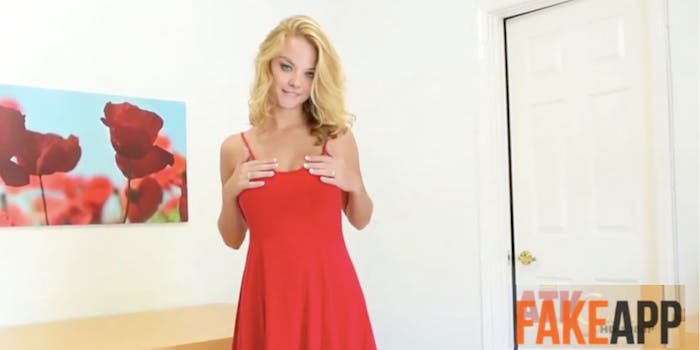 In a Motherboard post that put deepfakes on the map, Samantha Cole reported this week that a deepfakes subreddit—mostly, but not entirely, porn—has sprung up. One poster there, who goes by “deepfakeapp,” created an app so others could easily make their own altered videos.

“Eventually, I want to improve it to the point where prospective users can simply select a video on their computer, download a neural network correlated to a certain face from a publicly available library, and swap the video with a different face with the press of one button,” deepfake app told Motherboard.

Perhaps the most impressive deepfake so far is this CGI Princess Leia, from Rogue One: A Star Wars Story, that looks comparable to the big-budget version that actually appeared in the movie. A user called Derpfake claimed it took him all of  20 minutes.

There are also some popular, amusing Nicolas Cage fakes popping up on the subreddit. The deepfakers have really taken Cage’s iconic role in Face/Off to heart and taken his face … off! Here it is on Sean Connery’s body in a James Bond flick:

Years of exposure to very convincing Photoshops have trained internet users to be skeptical of every image they see. Even if it looks completely convincing, it could just be a skillful fake. We’re less skeptical of video: the technology for faking moving images is newer, jankier, and less widespread. But that’s starting to change, and we’re going to have to add awareness of this unsettling new tech to our media literacy toolboxes. In the age of fake news, skepticism is a valuable reflex.