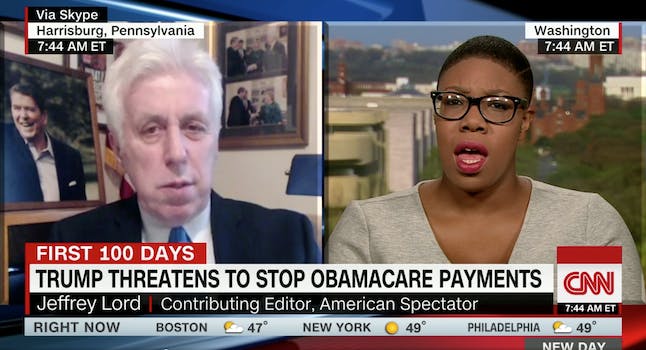 CNN analyst calls Trump the ‘Martin Luther King of healthcare,’ gets shut down

Political analysis doesn't get much more heated than this.

President Donald Trump may want to create a list of topics his surrogates just shouldn’t mention on national television.

“When I was a kid, President Kennedy did not want to introduce the Civil Rights bill because he said it wasn’t popular, he didn’t have the votes for it. Dr. King kept putting people in the streets in harm’s way to put the pressure on,” Lord explained in an attempt to justify his comparison.

“OK, Jeffrey. You do understand that Dr. King was marching for Civil Rights because people that looked like me were being beaten?” Sanders said. “Dogs were being sicced on them? Basic human rights were being withheld from these people merely because of the color of their skin? So let’s not equate Dr. Martin Luther King Jr.—a humanitarian, a Nobel Peace Prize winner—to the vagina-grabbing President Donald Trump.”