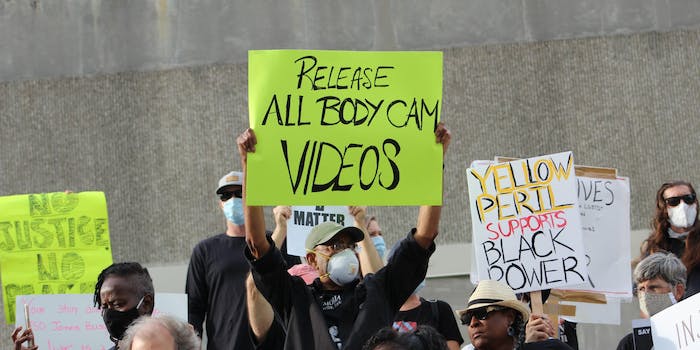 It may be the first in the nation.

The Jacksonville, Florida prosecutor’s office may be the first to change its policies for releasing body camera footage from police shootings in response to protests sparked by George Floyd’s death.

Jacksonville has seen dozens of protests for racial equality since Floyd was killed by Minneapolis police in May. Rapid release of body camera footage is among their demands.

In June, the State Attorney’s Office (SAO) for Florida’s Fourth Judicial Circuit announced that it would review its policies.

Under the policy announced today by State Attorney Melissa Nelson, body camera footage of an “officer-involved critical incident” (OICI), which includes shootings, may be released within 30 days. This is among the shortest timelines in the nation. Nelson told the Florida Times-Union that some jurisdictions release such footage in 14 days.

The change amounts to a compromise between the protest movement and law enforcement.

Local advocacy groups had called for releasing such footage within 48 hours. Prosecutors objected to that deadline on the grounds that two days isn’t enough time to conduct an investigation and could possibly impugn the outcome of a case, taint a potential jury pool, etc.

“If BWC footage is released before witnesses are interviewed, this footage may taint witnesses’ recollections, or worse, allow them to conform their accounts to match the video evidence,” the SAO’s memorandum stated. “Either possibility can threaten the integrity of an investigation.”

The SAO previously authorized release of these videos at the conclusion of its investigation, which could take months—or even years.

“The State Attorney’s Office agrees that the swift and certain public release of [body worn camera] footage in OICI is in the public’s best interest,” the memorandum states.

In the 30 days following the shooting, prosecutors will examine footage and physical evidence and interview witnesses and victims. The footage will also be transcribed and close-captioned during this time.

There are three circumstances in which prosecutors may not authorize release of the video in 30 days: 1) if an officer is killed (per Florida statute); 2) if releasing it may impede a prosecution or investigation; or 3) if doing so will violate the privacy of victims depicted in the footage object (their and/or their survivors’ objection will be factored into the SAO’s decision, but will not amount to a veto).

The Jacksonville Sheriff’s Office will ultimately release the footage. Nelson told local media today that the sheriff has committed to releasing the video upon her office’s authorization.

Florida State College at Jacksonville law professor Alexander Moody sees some problems with the policy. He said the term “officer-involved critical incident” may be open to interpretation. For example, if an officer’s camera captures footage of a civilian slaying another, such as the killings last week in Kenosha, Wisconsin, prosecutors may determine that the incident doesn’t qualify.

“The public would have a high interest, a high value in seeing [body-worn camera] footage,” he said.

He also said that the decision and investigation would better be conducted independently of law enforcement involved in the incident.

“Have the release of the footage be done by an independent body that’s not within the hierarchy of the police department administration, and then have independent review created by the state attorney general’s office,” Moody said.

“The investigation of officer-involved critical incidents should be done at the state level,” he added.

Moody said that the public has a compelling interest in obtaining video of police violence.

“If the state really is going to honor its values of government in the sunshine, that suggests that body worn camera footage should be released.”