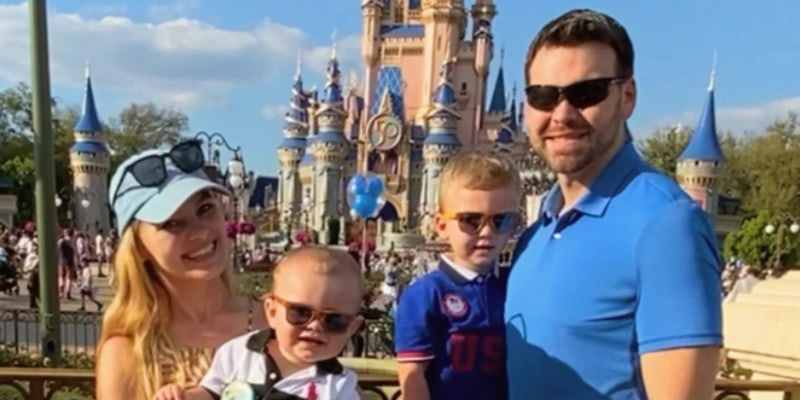 ‘You didn’t boycott groomer world?’: Jack Posobiec took his kids to Disney right before leading campaign branding it as pro-pedophiles

'Surprised you would take your precious children to the demon mouse...'

Posobiec had been temporarily locked out of his account for promoting T-shirts bearing not just the term “Disney Groomers” but the phrase “bring ammo” as well.

The term “groomers” has become popular in conservative circles in response to the debate over Florida’s “Parental Rights in Education” law, referred to by its critics as the “Don’t Say Gay” law. Conservatives have attempted to label those opposed to the legislation, which surrounds discussions on LGBTQ-related topics in schools, as akin to pedophiles. Disney has been a vocal opponent of the new law.

On Feb. 28 Disney’s LGBTQ staff sent company CEO Bob Chapek a letter asking him to condemn the legislation. Roughly a week later in early March, Chapek released a company-wide memo arguing that Disney could make the biggest impact by “creating a more inclusive world… through the inspiring content we produce.”

After the bill passed the Florida Senate on March 8, Chapek officially spoke out against the legislation for the first time in a meeting with shareholders. Chapek also vowed to donate $5 million to the Human Rights Campaign and other organizations pro-LGBTQ organizations. Chapek’s public condemnation of the bill came 16 days prior to Posobiec’s Instagram post regarding his visit to Disney World. Posobiec is alleged to have made the trip to Disney World in Feburary during the CPAC conference, although the Daily Dot was not able to confirm the claim. Why Posobiec would still choose to post the image in late March after Disney denounced the bill remains to be seen.

When the bill was signed into law on March 28, Disney argued in an official statement that it “should never have passed.”

Throughout this month, Posobiec has made and promoted numerous tweets suggesting that the company is abusive to children.

Yet Posobiec’s supporters were in for a shock on Thursday after it was discovered that their far-right hero had taken his family to Disney World in Florida just last month.

In a March 24 Instagram post from Posobiec’s wife, the conspiracy theorist can be seen posing with his wife and two children in front of the park’s Cinderella Castle.

Users have since flooded the post with questions over why the supposedly anti-Disney crusader was spending his time and money at the company’s flagship park.

“Surprised you would take your precious children to the demon mouse to have them indoctrinated into this horrific place,” one commenter wrote.

Another noted that he “loved” Posobiec but could not understand why he would take his family to what they dubbed as “groomers world.”

“You didn’t boycott the groomers world? I must say I’m surprise tbh really surprised, I thought jack didn’t like the groomers at Disney, and i love jack btw,” the user wrote.

Posobiec’s wife, whose user name is @realtanyatay, appeared to own up to the issue but failed to explain why the family took the trip in the first place.

“I must say, I regret this decision,” she wrote. “No one is perfect.”

Posobiec’s wife even appeared to allude to the fact that she had to convince her husband to go to Disney World despite the company’s political stances.

“I talked Jack into it. He agreed to one day for the sake of the childhood memories with the kiddos,” she said. “And Disney used to be so family oriented, isn’t it sad.”

Despite the backlash, Posobiec’s wife didn’t outright vow that she wouldn’t return to the park in the future.

“This could be our first and last picture in Disney,” she added.

Ironically, Posobiec also posted the photo to his Instagram account on March 24. Comments have since been disabled, suggesting that Posobiec may have received similar pushback.

Unsurprisingly, more recent posts from his account show him promoting bumper stickers using the “Disney Groomer” phrase. Posobiec’s followers, however, were quick to note the hypocrisy.

“Didn’t someone just post a picture standing in front of Disney a week ago…” the user wrote.

At current, Posobiec has not addressed the trip in question and continues to promote anti-Disney merchandise.

Editor’s note: This post has been updated to fix a typo, and updated for clarity and context.