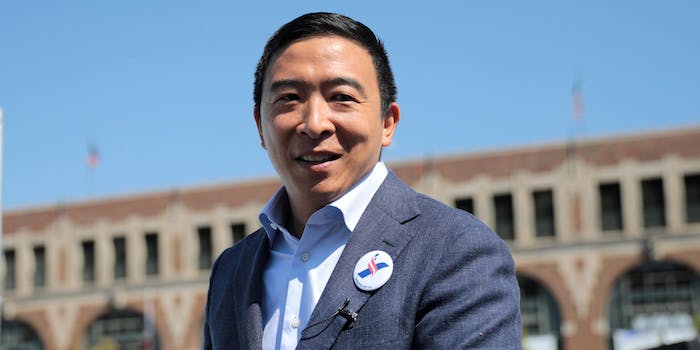 Yang went in on Facebook during a CNN town hall event.

2020 Democratic presidential hopeful Andrew Yang tore into Facebook on Wednesday night, saying that it was “contributing to the disintegration of our democracy.”

Yang made the remarks during a CNN town hall event on Wednesday night. Yang pushed strongly that Facebook should not allow false political advertisements on its platform—an issue that has been at the center of controversy for the social media giant.

When asked what he would say to Facebook CEO Mark Zuckerberg, Yang said:

“Mark, your company is contributing to the disintegration of our democracy. If you an American and a patriot, and care about the country your kids will inherit, then you need to have Facebook step up and say there will not be untrue political ads on your platform,” Yang said.

“My first preference is to sit down with a major organization like Facebook and say ‘hey, do the right thing.’ But if they don’t want to do the right thing, then we have a legislature for a reason. We should just pass a law that says Facebook should not have verifiably false political advertisements on their platform, and if they do, they should pay a penalty accordingly.”

Facebook’s political advertising policy, which essentially allows politicians to run ads even if they contain false information, has been criticized by lawmakers and even its own employees.

Andrew Yang's message to Facebook CEO Mark Zuckerburg: “Your company is contributing to the disintegration of our democracy. … You need to have Facebook step up and say [there] will not be untrue political ads on your platform” #cnntownhall https://t.co/F6ixm5JWaE pic.twitter.com/7OWAakGNHK

Yang also said Facebook should be treated as a publisher, not a platform, a distinction at the center of the arguments surrounding Section 230 of the Communications Decency Act.

Specifically, the section says: “No provider or user of an interactive computer service shall be treated as the publisher or speaker of any information provided by another information content provider.”

The Electronic Frontier Foundation has called the section “one of the most valuable tools for protecting freedom of expression and innovation on the internet.”

“We need to make Facebook own up to its responsibility as a mature company and get away from this total cop-out that they’re like ‘we’re not a publisher, we’re a platform.’ Are you kidding me? You’re the biggest publisher in the world today and you need to start acting like it.”

“Your company is contributing to the disintegration of our democracy,” says Andrew Yang to Facebook CEO Mark Zuckerberg. “If you are an American and a patriot … you need to have Facebook step up and say there will not be untrue political ads on your platform.” #CNNTownHall pic.twitter.com/POrteXaGxG

Yang is not the only 2020 Democrat who has spoke about changing, repealing, or tweaking Section 230.

In November last year, Yang released a plan about how he would regulate tech firms. Within it, he said he would “amend the Communications Decency Act to reflect the reality of the 21st century—that large tech companies are using tools to act as publishers without any of the responsibility.”