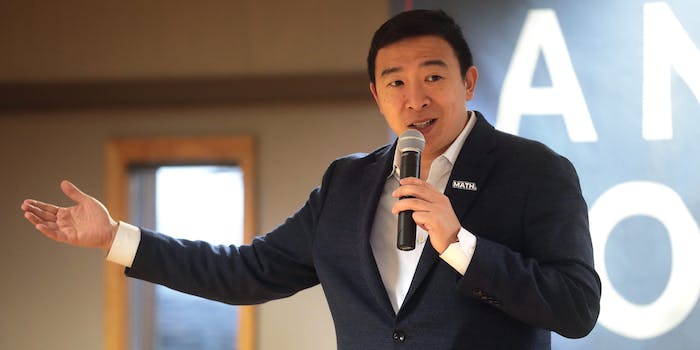 Yang was popular, but he suspended his campaign on Tuesday.

Andrew Yang, the businessman who pushed himself into the conversation of the crowded 2020 Democratic presidential primary field, announced on Tuesday night that he was suspending his bid for the White House.

CNN reports that Yang is planning to suspend his campaign in a speech on Tuesday night amid the New Hampshire primary.

Yang told the Daily Beast that he looked at the possibility of him winning states moving forward as he made his decision.

“I’m a numbers guy and if we are below a threshold where we are going to get delegates here in New Hampshire, if we are unlikely to hit that threshold in Nevada and South Carolina, it doesn’t seem like we are actually furthering the goals of the campaign by staying in the race longer,” Yang told the news outlet.

“I’m not someone who wants to take people’s donations, support, time and dedication if I don’t think we have a chance to win or advance our goals in the right direction,” he added.

Yang popularized the idea of universal basic income (UBI) with his Freedom Dividend, which promised $1,000 a month to every American adult.

“Andrew Yang says if any Democratic candidate wants his endorsement, they need to come out in favor of UBI,” Politico reporter Eugene Daniels tweeted.