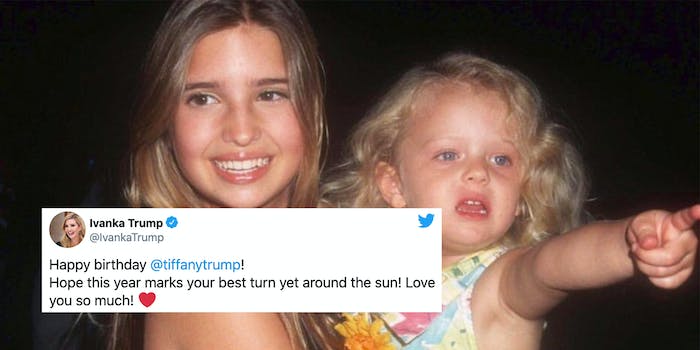 In a failed attempt at a “happy birthday” post for her half-sister Tiffany Trump, Ivanka Trump is facing ridicule for seemingly tagging a bot account instead of her actual sister.

“Happy birthday @tiffanytrump!,” Trump wrote in a tweet Tuesday, alongside a throwback photo of her younger half-sister crying in her arms. “Hope this year marks your best turn yet around the sun! Love you so much!”

But, there was just one issue with Trump’s “heartfelt” birthday message: She didn’t bother to tag the right Tiffany, @TiffanyATrump, in the post. Despite having hundreds of followers, many of which are visible Trump supporters, the account appears to be a bot account. It’s following no other users, has no tweets, and lacks a profile picture. It is also unclear if the account only got its decent-sized following after Trump’s post.

Netizens were not shy about calling Trump out for the fail either, with many shaming the White House advisor for seemingly not knowing her own sister’s Twitter handle. Some users began questioning if Trump even follows her sister.

“I reckon your birthday wishes don’t mean as much when you can’t even tag the right account,” replied one user to the birthday message. Another responded, saying, “Ummm you tagged the wrong account…for your sister. Let me help you @TiffanyATrump Maybe just text her next time. You have the number right?”

Another simply chalked the whole thing up as a “weird-ass post.”

Correction 11:47am CT, Oct. 14: An earlier version of this post misstated the relationship between Ivanka and Tiffany Trump. They are half-siblings.