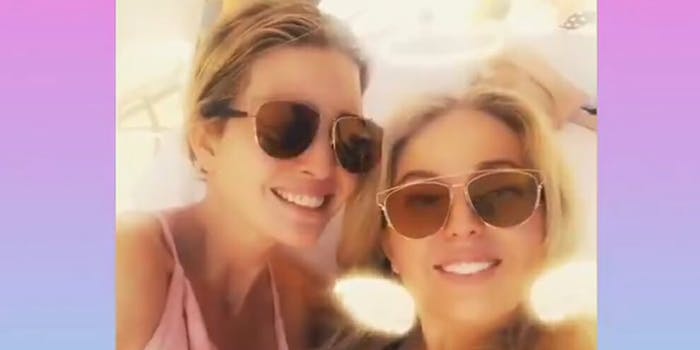 'Just another way to say, "Suck it poor folks!"'

Ivanka Trump and her half-sister Tiffany wished their followers a merry Christmas with a waterside selfie video from Mar-a-Lago on Tuesday—only to be immediately criticized for the post.

In the bubbly clip posted to Tiffany Trump’s social media, the sisters grin and blow kisses at the camera as angelic camera filters give them wings and “O Holy Night” plays in the background. “Merry Christmas,” Tiffany Trump says at the end of the video.

One commenter was quick to remind President Donald Trump’s daughters that while they lounge around in bikinis, the majority of people in hurricane-ravaged Puerto Rico are still without electricity.

“I sure hope your fellow Americans in Puerto Rico who have been without power for 3 months enjoy this as much as you are,” one commenter wrote on Instagram.

Plenty of others tweeted their disapproval of the video.

Just another way to say, "Suck it, poor folks!" disguised as "Merry Christmas!"

@trumps_feed @IvankaTrump Sorry we missed you at the homeless shelter handing out Christmas gifts.

The sisters apparently learned nothing from their stepmother Melania Trump, whose Christmas selfie last week received a flood of criticism.

Tiffany Trump posted again to Instagram on Tuesday night, posting a photo of herself in Mar-a-Lago and writing, “Wishing everyone a happy and peaceful year to come!”