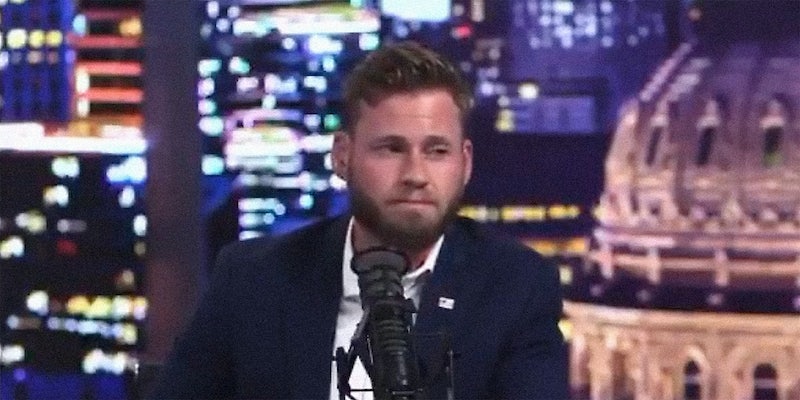 Over the weekend, Infowars host Owen Shroyer announced that he will turn himself in for charges associated with his alleged role in the Capitol riot. Now a fundraiser for his defense is quickly closing in on its goal of $250,000.

“I, as well as many other people in this country, are being politically persecuted by our federal government, and by the Democrat Party and by big media and by big tech,” he said. Shroyer added that these entities were “working in collusion” to silence their opposition and create a global government. He says the only evidence in the case is of him “peacefully” standing outside the Capitol.

Infowars reports that Shroyer’s lawyer, Norm Pattis, said in a statement, “This prosecution is a frontal assault on the First Amendment.”

According to charging documents, prior to Jan. 6, Shroyer called upon his audience to go to Washington, D.C. to “stop this certification of the fraudulent election.” He also reportedly said, “We are the new revolution! We are going to restore and we are going to save the republic!”

Other videos circulating on social media purport to show Shroyer engaging in similar conduct in the nation’s capital before the riot.

Prosecutors allege that, on the day of the riot, Shroyer led a group in a march to the Capitol. They say videos depict him leading the crowd in chants of “1776!” and standing next to Jones and Ali Alexander, who organized the “Stop the Steal” protest that became the riot. Neither Jones nor Alexander have been charged.

“Today we march for the Capitol because on this historic January 6, 2021, we have to let our congressmen and women know, and we have to let Mike Pence know, they stole the election, we know they stole it, and we aren’t going to accept it!” Shroyer also said, according to the complaint. It also states that he called into an Infowars live broadcast and bragged that they’d taken the Capitol grounds.

Charging documents include several screenshots from videos that purportedly depict Shroyer within restricted areas around the Capitol.

Shroyer’s case is complicated by prior charges against him for disrupting a House Judiciary Committee meeting in December 2019 during former President Donald Trump’s first impeachment.

Two months after this arrest, Shroyer reportedly entered a deferred prosecution agreement (DPA). The DPA prohibited him from engaging in disruptive or disorderly conduct on Capitol grounds, including by using “loud, threatening, or abusive language […] with intent to impede, disrupt, or disturb the orderly conduct of any session of the Congress or either House thereof,” the current charges state.

Shroyer also agreed to complete 32 hours of community service, court documents state. The Justice Department says that he had not done so as of Jan. 6; therefore, the DPA remained in effect.

After announcing he would turn himself in, Shroyer pled with his viewers for donations to help fund his defense. GoFundMe has since suspended his fundraiser.

On a fundraising site that’s popular among the far-right and other accused Capitol rioters, however, Shroyer has already raised nearly $175,000 of his $250,000 fundraising goal.