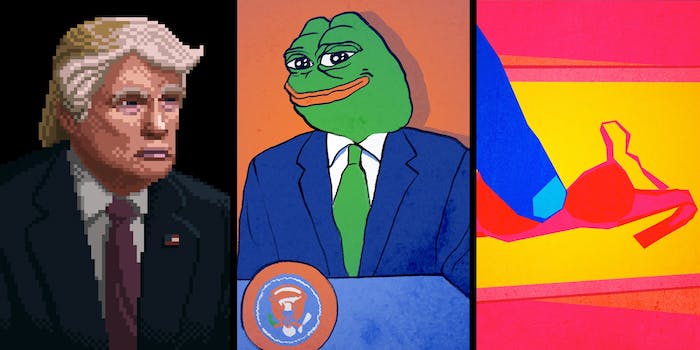 Important news you may have missed on Tuesday, Sept. 6.

While running for president as a member of Le Meme Party, Pepe Le Frog received a letter from the Federal Election Commission demanding verification he actually exists—the latest example of the agency cracking down on imaginary candidates. (See also: Deez Nutz)

Convicted rapist Brock Turner, who was released from jail last week after serving only half of a six-month sentence, has officially been registered as a sex offender in Ohio.

Philippines President Rodrigo Duterte is trying to walk back comments he made about President Obama. In response to a reporter’s question last week, Duterte referred to Obama as a “son of a whore.” The Obama administration subsequently cancelled a meeting between the two world leaders.

A new national poll of likely voters has Donald Trump leading his opponent, Hillary Clinton, by two points. On average, Clinton is ahead in seven of the 2016 battleground states. Essentially, the math remains in her favor—for now.

Erin O’ Flaherty will become the first openly gay woman to compete in the Miss America pageant this weekend. The 23-year-old said she hopes her presence “will help with visibility for the [LGBT] community.”

Why social media is the new cyberweapon of choice —via Nick Hayes, InformationWeek

Donald Trump and the fall of Atlantic City —via Joshua Cohen, n +1

Complete audio of every 911 call regarding the Sept. 11, 2001, terrorist attacks has been released —via Memory Hole 2

President Obama, addressing cybersecurity concerns following the G-20 summit in China, says the U.S. has the greatest “capacities” to hack of any nation —via Joe Uchill, The Hill

Activists want the FBI to show the warrant for the mass hack of TorMail users —via Joseph Cox, Motherboard

A Republican candidate in New Jersey told a reporter that he hopes someone rapes her —via Olivia Nuzzi, the Daily Beast

How one photo can hack millions of Android phones —via Thomas Fox-Brewster, Forbes